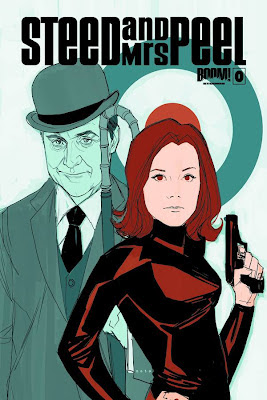 Boom! Studios has revealed some of the covers available for the first (#0) issue of their new, ongoing Avengers comic book, Steed and Mrs. Peel. (The actual title The Avengers is conspicuously already taken on comic shop shelves.) As previously reported, the series will be written by Mark Waid. Waid is most famous probably for the DC epic Kingdom Come (which featured a one-panel cameo from Steed and Emma), but perhaps more germain to Steed and Mrs. Peel is his outstanding work on the Crossgen series Ruse, which was essentially Sherlock Holmes crossed with The Avengers--and a whole lot of fun. 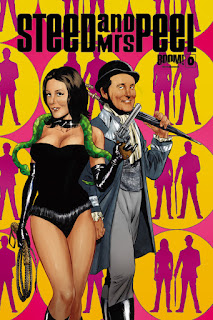 Previews has posted the main cover for Waid's upcoming series, which will be drawn by Athena Voltaire artist Steve Bryant. As previously discussed, issue 0 will be a direct sequel to the infamous Avengers TV episode "A Touch of Brimstone," in which Steed took on the villainous Hellfire Club and Emma donned a dominatrix costume to become the Queen of Sin. Years later, Chris Claremont and John Byrne paid homage to that episode in Marvel's X-Men comics, appropriating the Hellfire Club as their own villains, and even borrowing actor Peter Wyngarde's likeness (albeit closer to his Jason King character than his "Touch of Brimstone" character) and name as Hellfire Club member "Jason Wyngarde." Emma Peel herself, in her Queen of Sin incarnation, spawned the popular X-Men character Emma Frost, whose White Queen outfit was the inverted twin of Mrs. Peel's own costume. 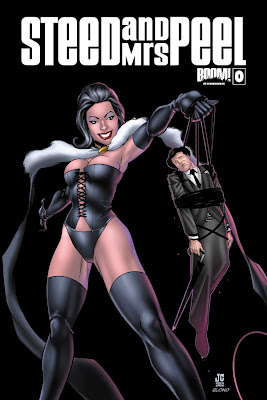 Bleeding Cool has some of the variant covers by Josh Corvey, which take the homage full-curcle and specifically reference X-Men covers that originally referenced The Avengers' Hellfire Club.