New Spy DVDs Out This Week and Last: Saints and Liquidators 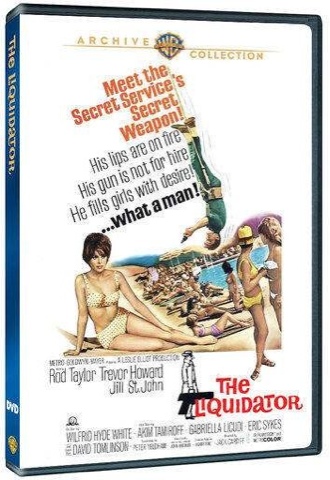 Finally! I've been waiting years for an official release of The Liquidator (1965), and this week, thanks to the Warner Archive, we've got one, on MOD. The Liquidator is Boysie Oakes, John Gardner’s pre-Bond anti-Bond. Gardner's Oakes books were sort of a direct response to Fleming’s Bond books, and parodies of them. Jack Cardiff's film version certainly latches onto that, firmly hitching its wagon to 007, but feeling more like Flint. (It's got that lavish, widescreen studio feel of a Sixties Fox movie, even if it was made by MGM... and now released by Warner.) It never quite lives up to its amazing Bob Peak poster, or its classic Lalo Schifrin-penned Shirley Bassey theme song, but it's nonetheless a real treat for Sixties spy fans! Rod Taylor (who also starred in the enjoyable Eurospy flick The High Commissioner) stars as Boysie, and Jill St. John’s along for the ride looking great and maybe even contributing just a little bit more to the plot than does her useless Tiffany Case character in Diamonds Are Forever. (The film, that is. Tiffany was actually quite an enjoyable character in the novel.) Warner's manufactured on demand release is completely remastered and anamorphically presented in its original 2.40:1 aspect ratio. It's available now directly from Warner Archive for $17.95, and beginning September 6 from Amazon. 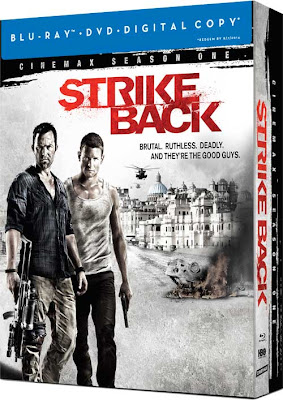 Cinemax's first U.S. season of Strike Back finally hits DVD and Blu-ray in North America today. The excellent true first season of Strike Back (reviewed here), produced for the UK's Sky satellite network, never aired in America. But the show that ended up on Cinemax, that American viewers know as the first season of Strike Back, functioned as Season Two of the series in Britain. It was released on DVD and Blu-ray there last fall as Strike Back: Project Dawn. While the superior original series still has yet to be seen here, HBO Video has come up with a pretty good, not too confusing way of labeling their release: Strike Back: Cinemax Season One. I really hope that down the road (maybe when The Hobbit opens this winter and makes star Richard Armitage more of a household name?) they also give U.S. viewers a chance to see the "UK Season One" or however they decide to label it, but for now this isn't a bad consolation prize. (Spy fans with all-region players can get the Region 2 DVD of the original show fairly cheaply from Amazon.) So far I've only seen the first two episodes of the Cinemax version (reviewed here) during the cable channel's free preview weekend, but they were packed with fun, exciting, over-the-top spy action of a sort rarely seen on American television, and I'm very much looking forward to following the rest of the adventures of Section 20 operatives Stonebridge and Scott (Philip Winchester and Sullivan Stapleton) on home video. The violent hunt for an elusive terrorist mastermind named Latif takes the two agents around the world to locations including New Delhi, Capetown and Darfur. There's a standard DVD version and a Blu-ray/DVD/Digital Copy combo pack to choose from, retailing for $49.98 and $59.96 respectively, and both significantly cheaper on Amazon right now. Both versions include audio commentaries. Be warned, though, that the packaging on the combo pack is annoyingly chunky. There's no reason in the world why a 10-episode cable season needs to be in thick gatefold packaging like the early seasons of 24! 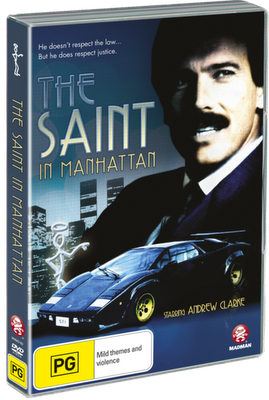 And the rarest one for last! I honestly never thought I'd see this one get an official release... but here it is! A few weeks ago, Australia's Madman label released a Region 4 PAL DVD of the rarest of all The Saint's TV incarnations, the 1987 telefilm (and failed series pilot) The Saint in Manhattan, starring Australian Andrew Clarke as the infamous Simon Templar. This is the version that, true to its time, recast Templar in the Magnum mold, complete with mustache and Italian supercar (a Lamborghini Countach). Obviously it didn't go to series, but I personally think it's better than its reputation would indicate... and I like Clarke. (More than Simon Dutton, in fact.) But I've only ever seen it in a grainy, third generation VHS recording, so I look forward to watching it again on DVD as if for the very first time! This makes Australia the first country to get all the Saint TV shows on DVD. As far as I know, the 1989 Simon Dutton series has only been released there so far as well, on Madman's sister label Umbrella. You can watch a short clip from The Saint in Manhattan on the Madman website... but it's not totally indicative of the production as a whole. The cost is $14.95AU, which might seem steep for a single 50 minute TV episode, but for Saint completists it's definitely worth it. No if only someone would release The Saint Lies in Wait (which I also like)...
Posted by Tanner at 2:52 PM

The Liquidator recently aired on Turner Classic. The print was beautiful. I'd never seen this flick before and was pleased. It's got lots of comedic elements but is not outright camp in the style of Matt Helm or a send-up like the Flint films but lands somewhere in the middle. Considering that Rod Taylor was the star, more hand to hand fights would have juiced up the film.

This is the second dvd that Madman has released that I have to pick up, the other one being Roger Moore's "Sherlock Holmes in New York". I wish there was an Amazon.au.

Network was supposed to release the Dutton Saints with this pilot as a bonus but that deal fell through.

Thanks, Delmo... You made my day! I didn't know Madman had released Sherlock Holmes in New York. And checking their website, I see they got Roger Moore to do a commentary, too! I'll definitely have to get that, ASAP! I, too, wish there were an Amazon.au. In the meantime, though, I find Ebay the best way to get these R4 titles. That's very frustrating that the Network deal for the Dutton Saints fell through.

Elliot, I would have probably been happier with The Liquitator if it HAD played up the comedic elements a tad more (OR played up the action more), but it's still good to look at as is. I saw that TCM broadcast, too, and it was by far the best print I'd ever seen of this movie. I'm assuming it may have been a preview of this remastering? Warner Archive teased this release months ago on Facebook, and I'm so glad it's finally happened! Gotta admit, though, I was hoping it would come along with a wave of other Sixties spy titles. Oh well.

There's one Rod Taylor film that deserves the best possible remastering, either for DVD or TCM and that's the ultra-violent Darker Than Amber. I would guess that it's the usual ownership rights that keep it in limbo.

Without TCM, the classic 60s spy films would be non-existent on television since the people who program the premium cable stations have no interest in them, except for the yearly "30 days of Bond" specials that are shown in full-screen.

The Net is now the new showcase. I'm amazed at what people are posting to Youtube, usually unauthorized.

I have Darker Than Amber on tape. Looking it up on IMDB, I think the question is "who" has the rights to release it on dvd. It wasn't produced by or released by any company I've ever heard of.