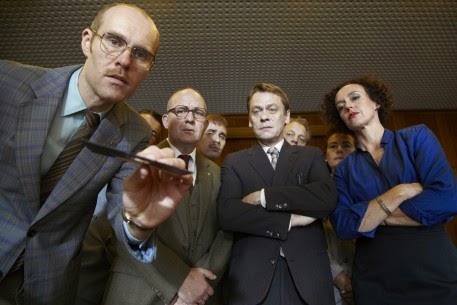 The success of The Americans has now led to U.S. networks seeking foreign period spy series, which is a very exciting development! According to The Hollywood Reporter, Sundance TV has picked up an 8-part German language spy drama, Deutschland 83, at the Berlinale European Flim Market. It will air in the U.S. later this year (and sooner on the German network RTL), making it the first German language series to run on American TV according to the trade. As the title would indicate, the Cold War show is set in 1983. Here's the official synopsis from the Berlinale website:


A NATO exercise, the peace movement and German New Wave music – young and inexperienced spy Moritz Stamm is sent to the West by the East German secret services and finds himself caught between personal and ideological fronts.

I'm very excited to see this! That sounds like an ideal cultural mash-up to me. And Berlin-set spy tales are always my favorites. Furthermore, while there are many great ones set in the Sixties, I find the early Eighties a particularly fascinating period of the Cold War, when tensions rose again and Berlin became even more of a powder keg than it had been. Len Deighton's Samson novels capture this era nicely, but I've always found it under-explored on television. And it will be particularly interesting to see it from a German point of view. It sounds like the creative talent involved has been thoroughly detail-oriented. From the trade:


Deutschland 83 was shot mainly in and around Berlin with a special focus on an exact re-creation of West Germany in 1983, when the country was at the center of the Cold War. “Finding locations hasn’t been easy,” says [director] Jorg Winger, 45, who co-created the show with his American-born writer wife, Anna Winger, 44. “So much has changed since the fall of the Berlin Wall, there are almost no houses left in the East that look like they did back then.” The production team ... finally found a sleepy suburb to the east of Berlin and a house where the furniture, and even the wallpaper, hadn’t changed in decades. It plays stand-in for the family home of Moritz, a young East German man (newcomer Jonas Nay) who is recruited to infiltrate the West German military as a spy.

The idea of an East German spy in the West German military ranks comes from Jorg Winger's personal experience. He tells the Reporter that he spent a chilling Christmas during his military service for the West listening to a Russian radio broadcast in which the Soviet broadcaster wished all the men in his unit a Merry Christmas... by name. This event led them to realize that they had a spy in their midst.

All told, this sounds like it has the makings of a truly compelling Cold War spy show, and I'm so grateful that we Americans will finally have access to some of the cool spy television coming out of Europe.
Posted by Tanner at 8:29 PM