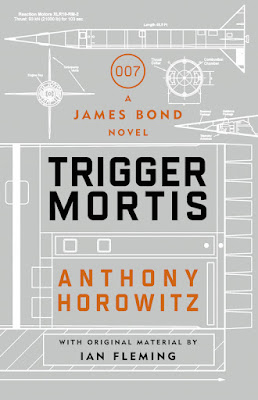 Last year, Ian Fleming Publications announced Anthony Horowitz as the author of the next official James Bond continuation novel. Today, marking Ian Fleming's birthday (it's already May 28 in England), Horowitz and IFP announced the title. (Via The Book Bond.) This September, James Bond returns in Trigger Mortis. Hm. Okay.... Well, I'll admit, it's not the best Bond title ever. In fact, I think it's probably among the worst, along with John Gardner's Cold. It sounds kind of like one of those titles Ian Fleming ultimately rejected, like Mondays are Hell or The Infernal Machine for what became Moonraker. One certainly couldn't imagine Shirley Bassey belting out those words, which tends to be my own test of a Bond title.

Title aside, though, there are still a lot of reasons to be excited about this book! Foremost among them is Horowitz himself. Horowitz is an excellent choice for a Bond continuation author. For one thing, he created one of my favorite TV shows of all time, Foyle's War (starring Michael Kitchen, Bill Tanner to Pierce Brosnan's 007 in GoldenEye and The World Is Not Enough). The meticulously researched period detective show turned period spy show clearly demonstrates that Horowitz has the chops for telling a Bond story set in 1957, which this is. For another thing, Horowitz has already penned two tremendously well received official Sherlock Holmes continuation novels, so he's no stranger to writing about other authors' characters. (In his prolific TV work, he's also written about Hercule Poirot and The Saint among many others.) And finally, Horowitz has demonstrated his clear love of and study of Ian Fleming in his hugely entertaining, bestselling Young Adult spy novels about Alex Rider. Many of the Alex Rider books are clever, direct reworkings of/homages to Fleming's Bond novels. The first one, Stormbreaker, sports a plot, structure and villain based on Fleming's Moonraker. The second one, Point Blanc, takes its queue from On Her Majesty's Secret Service. And so on. But with their teen protagonist, the books do not read like rip-offs at all, but staunchly original loving homages.

Another reason to be especially excited about Trigger Mortis is the time when it's set. IFP's post-Benson continuation novels have all been one-offs, and it's been up to each writer whether to write a period piece set in roughly the timeline of Fleming's novels, or to write a contemporary Bond novel, as previous continuation authors had always done. Both previous period novels about the adult James Bond, however (Sebastian Faulks' Devil May Care and William Boyd's Solo) have taken place after all of Fleming's novels in the late Sixties. Trigger Mortis will be the first to be set in the 1950s, the period in which most of Fleming's novels were written and take place. In fact, we now know that it will be set in 1957, fitting snugly into the Fleming timeline two weeks after the events of Goldfinger. According to the press release, "Horowitz places Bond in the middle of the Soviet-American Space Race as the United States prepares for a critical rocket launch, and brings back the most famous Bond Girl of all: Pussy Galore! ... As well as Pussy Galore, the book features: brand new Bond Girl Jeopardy Lane; Jai Seung Sin, a sadistic, scheming Korean adversary hell-bent on vengeance; and breathless, globe-trotting adventure." Locations include London, New York, and Germany's Nürburgring racetrack.

"I was so glad that I was allowed to set the book two weeks after my favourite Bond novel, Goldfinger," Horowitz said in a statement, "and I'm delighted that Pussy Galore is back! It was great fun revisiting the most famous Bond Girl of all - although she is by no means the only dangerous lady in Trigger Mortis. I hope fans enjoy it. My aim was to make this the most authentic James Bond novel anyone could have written." While I'm excited for the late Fifties setting, the Goldfinger reference actually gives me another bit of hesitation. I'm a bit surprised to read that it's Horowitz's favorite Bond novel. It's unquestionably my least favorite Fleming novel, a story based far too much on coincidence (even for Fleming, who often relied on coincidence) in which Bond is mostly a passive player. Upon learning Bond's identity, Goldfinger's decision to not only spare his enemy's life but put him to work as his secretary (therefore privy to his entire plan to knock off Fort Knox!) beggars belief too much. And the book has a particularly mean-spirited tone, as if Fleming were in a bad mood when he wrote it. (According to Matthew Parker's excellent biography Goldeneye: Where Bond Was Born, he probably was!) It seems either daring or poorly judged to bring back Pussy Galore, arguably the most problematic Bond Girl since Bond "converts" her from lesbianism, and to employ a Korean villain since Fleming's rather racist remarks about Koreans in that book are notoriously controversial. I actually don't think that Fleming was particularly racist, even for his time, and will defend most of his books against those charges, but Goldfinger is pretty indefensible. Furthermore, there's already been one recent continuation novel based on Goldfinger. Sebastian Faulks rather inexplicably chose to model the structure of Devil May Care on Goldfinger, which meant that it suffered from the same weaknesses of an over-reliance on coincidence and, worse, a passive hero. (Even moreso than in the Fleming book.) However, I'm not particularly worried about Horowitz falling into the same traps. For one thing, he's already based an Alex Rider book on Goldfinger (Eagle Strike, review here) and like the writers of the film, he managed to fix many of Fleming's narrative problems in doing so. For another, we have no reason from this press release to believe that Horowitz will be emulating Goldfinger in any way, only that his novel will directly follow the events of that book, and carry over its heroine. (Incidentally, this is not the first time a Fleming heroine has been brought back in a a continuation story. The comic "Light of My Death," published in four installments in Dark Horse Comics in the early Nineties, reintroduced From Russia With Love's Tatiana Romanova.)

Finally, the number one reason to be excited for Trigger Mortis is that unlike any other Bond continuation novel in history, this one will be in part based on an unused story idea by Ian Fleming himself! Per the press release: "Uniquely among latter-day Bond authors, Horowitz has included original Ian Fleming material: a treatment for 'Murder on Wheels,' an episode of a television series that was never made. Fleming’s text sees Bond in the high-octane world of motor racing and it is his never-used plot that kicks off the action of Trigger Mortis. Anthony Horowitz said: 'It was always my intention to go back to the true Bond, which is to say, the Bond that Fleming created and it was a fantastic bonus having some original, unseen material from the master to launch my story.'" Isn't it great to see that bit in the box at the bottom of the cover?! Heck, it's great just to see Fleming's name anywhere on the cover of a new Bond book. He hasn't been credited there since that insulting "Sebastian Faulks writing as Ian Fleming" attribution on Devil May Care. (I do miss the days of the Putnam John Gardners, which always blared, "Ian Fleming's Master Spy James Bond in _____ by John Gardner." That was a respectful way to do it.) And speaking of that cover, it's a nice one! It's a very different sort of design than we've ever seen before for a James Bond hardcover, but very much in keeping with other Horowitz books. I can't wait to get my hands on the actual book! Despite my misgivings about the title and the Goldfinger influence, I am very, very much looking forward to this novel.

Check out a short video "trailer" for the book below.

Yes, the title does throw me a little. I'm hoping that it's a line uttered by one of the characters.
As for the Korean villain out for revenge, I wonder if OddJob had a sister? Cover art for the book looks cool, even if the font appears a little too modern for the mid 1950s...actually, scratch that, I'm beginning to think that it mimics military blueprint fonts. In which case, well done!
Although I said it in the past, about both "Devil May Care" and "Solo" (boy, was I wrong about those two!), I definitely have a good feeling about this one. I'm hoping that Horowitz's thriller writing chops will deliver a taut story with the kind of tension that was lacking in previous efforts.
I'm sure this book will not be all things to all Bond fans, but I think it'll be a good one.
Anyway, we'll find out in September.

It sounds like an Alex Rider title. And it would have made a great Alex Rider title. Horowitz is clearly fond of the puns for those, like Point Blanc, which I quite like. But it doesn't work for Bond. The font reminds me of another Horowitz book, but I can't think of what. Maybe Alex Rider, or maybe one of his Sherlocks. Or maybe I'm just thinking of the Alex Rider Gadgets book because of the blueprint design. I wonder if the American cover will be the same?

Yes, I have a good feeling about it too! Based on Horowitz, and based on the actual Fleming connection.

You didn't like Solo? I hated DMC (though it had a GREAT title!), but liked Solo. I think Boyd could still do better, but Solo was decent.

I preferred Solo to DMC, but still felt that the final act seemed rushed and without Bond being put through the ringer. One review stated that it ended like an episode of "Columbo", where we find Bond discussing the bad guy's plan with somebody else (I forget who, exactly) over a drink and a cigarette. Pretty sure I'll have to read it again at some point. Same with DMC, if I dare. Although, I could probably re-read DMC a lot more readily than "Carte Blanche".
And yes, given another shot at it, Boyd might deliver a better tale. Still, writing Bond isn't easy, so I can't be too harsh on these fellows. It's indeed a fine line trying to write a taut, suspenseful spy thriller and still be literary.

As for the title, I'm reminding myself that I don't buy chocolate bars for the wrapper, so I'm inclined to just accept it and hope that the contents counteract it. I'm still hoping that some incidental character says the phrase;
"Bond ran his eye over the body lying on the cold steel trolley. A variety of deep bruising peppered the upper torso. The legs showed numerous lacerations to the bone and there was a single bullet wound just below the right collarbone. It was difficult to determine which wounds would have killed the man.
'What was the cause of death?' , he asked the Coroner, who was busy at the sink, stirring a cup of tea.
"Trigger mortis, I'd say. Wouldn't you, Commander?', he replied, the left corner of his mouth lifting in what Bond assumed was the man's version of a smile."

I just hope that Bond doesn't say the title as some Roger Moorey-type quip.

Recently read 'Moriarty' by Horowitz and was very disappointed. The book ended with a surprise twist that felt like a cheap gimmick. However I do enjoy 'Foyle's War'. After various author's attempts, I always end up returning to Fleming.