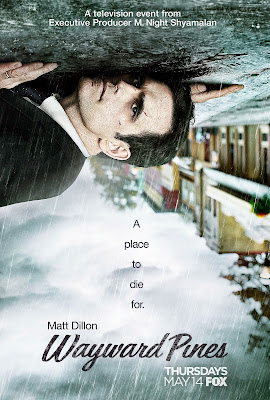 A government agent arrives in a small town surrounded by pine forests where he meets the local sheriff and discovers everyone in the town is, well, weird. Sound familiar? Wayward Pines is only Twin Peaks in its ephemeral trappings, however. Let me rephrase the premise. A government agent wakes up in a mysterious village uncertain of how he got there or who put him there. He soon comes to realize that he's a prisoner in this weird village, and that it's very difficult to tell his fellow prisoners from the jailers among the village's eccentric inhabitants. Oh, and he's apparently been given a number, though we don't dwell on that. Again, sound familiar? It's a very clever trick disguising a rip-off of one thing as a rip-off of another!

"Rip-off" may be a harsh word. Regular readers will know that I'm a pretty big fan of rip-offs, in fact. And the basic conceit of "what if, instead of waking up in The Village, Number 6 wakes up in Twin Peaks?" is pretty tough to argue with! It's a good idea (adapted from a novel by Blake Crouch). And the pilot overall acquits itself far less embarrassingly than AMC's officially licensed Prisoner remake a few years ago.

Unlike the AMC remake, most of the changes that director/producer M. Knight Shyamalan and writer/producer Chad Hodge make to the premise make sense for a contemporary update of The Prisoner. Instead of the supremely self-assured agent played by McGoohan, Matt Dillon's agent, Ethan Burke, has suffered past mental trauma and isn't at all confident in his own sanity. Is he hallucinating everything? We're fairly certain he isn't, because unlike The Prisoner, Ethan has family on the outside who are searching for him, and we cut back to them throughout the episode. (His wife is well played by Kiss Kiss Bang Bang's Shannyn Sossamon.) He's also got a former partner, Kate, played by Carla Gugino (Spy Kids) who turns up in Wayward Pines as one of its fully integrated residents. There are certainly shades of the Prisoner episodes "A, B and C" here, but taken to its logical, more continuity-heavy conclusion. Demonstrating that Wayward Pines isn't just a rip-off, there's also a very interesting and potentially sci-fi twist to Gugino's character. While she's only been missing for a few months as far as Dillon's character is concerned, she has apparently aged a lot in that time and tells him she's been living there for years. Intriguing!

The changes from The Prisoner's format that don't hold up so well tend to be cases of intellectual properties they don't have the rights too. A big electrified fence is simply no replacement for Rover! And obviously Ethan can't go around declaring that he's not a number; he's a free man... though I'm sure the sentiment must occur to him.

Further establishing Wayward Pines as clearly its own thing is the eccentric cast of characters both in and out of the pine-shrouded village. There is no Number 2, but there are a lot of Number 2 surrogates. Terrence Howard (Iron Man) plays the town's ice cream cone licking sheriff who's slow to investigate a murder Ethan tells him about, but quick to keep Ethan from leaving town. Melissa Leo (The Equalizer) plays a nurse in the nightmarish hospital Ethan wakes up in who also doesn't want him to leave, and seems quick with a hypo. Like so many Number 2's on The Prisoner, she shrouds her antagonism in obsequious politeness—up to a point, anyway. Most intriguing of all is Toby Jones (Captain America: The Winter Soldier) as the doctor in the hospital. Jones is an actor who would certainly have played a Number 2 had he been active in the Sixties, and his sinister character is the only one we see both in and out of Wayward Pines in the premiere. Out when he interacts with some of Ethan's Secret Service colleagues. Again, that's a fresh and logical direction to take from a Prisoner starting point. We never saw any Number 2's outside of the Village, but what if he had—and they were talking to Number 6's former superiors? This twist more than any demonstrates the possibilities of Wayward Pines.

The AMC Prisoner didn't feel remotely beholden to the original Prisoner, but of course it was to a point. It also didn't feel remotely original. Wayward Pines, on the other hand, so clearly inspired by The Prisoner, but in no way beholden to it, has plenty of leeway for an original spin on the concept. There's a good chance it could still drop the ball as disastrously as the AMC Prisoner did (Shyamalan's recent track record with his trademark twists isn't working in its favor), but I'm invested enough to take the ride and find out. I think a lot of open-minded Prisoner fans will also find plenty to enjoy.

Wayward Pines airs Thursdays at 9PM on Fox. The pilot has also been available On Demand for a few weeks already.