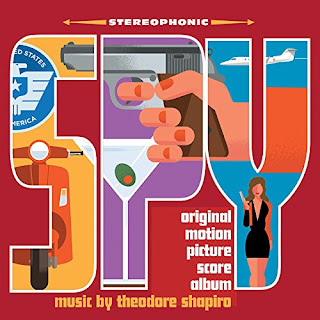 20th Century Fox debuted the official theme song for Paul Feig's James Bond parody Spy today. The music video (which I suppose may contain elements seen in the film's credits) is done as an homage to the classic Bond title sequences of Maurice Binder and Daniel Kleinman. The song is performed by LA-based singer/songwriter Ivy Levan. While there's no question she's got the powerful vocal chops to belt out a Bond-style title song, I wish the hook came earlier in the tune. It's a somewhat disjointed affair (and nowhere near as addictively hummable as Take That's Kingsman theme, "Get Ready For It"), but still a cool, distinctively "spy" song, and likely to serve its purpose just fine in the context of the movie. In another throwback to the classic Bonds, Levan's song will be included on Theodore Shapiro's original motion picture score album. Remember when the Bond songs were included on the score albums? That's how it should be! Speaking of that album, the retro-style cover artwork is fantastic. I hope the score itself is as good as Henry Jackman's Kingsman score. With all the espionage movies in the pipeline, this should be a very good year indeed for spy music! Spy, starring Melissa McCarthy, Jason Statham, Jude Law, Rose Byrne, Morena Baccarin and Peter Serafinowicz, opens on June 5.