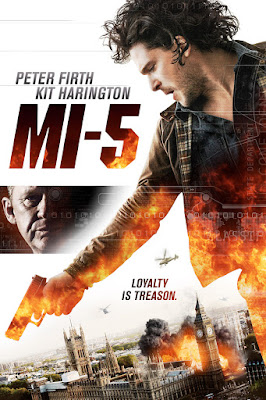 Americans been waiting anxiously for the 2015 movie version of the BBC TV series they know as MI-5 and the rest of the world knows as Spooks. Spooks: The Greater Good opened last May in the UK, but failed to materialize Stateside during the summer. But just as fans were starting to give up hope and think they'd have to import Region 2 DVDs, last month Deadline reported that Saban Entertainment would release the film, under the title MI-5 (no "Greater Good"), in the United States this December! And today we have a trailer and a poster for that release. And it's very different from the UK trailer we saw in March. Check it out below.

Last spring I speculated rather cynically that if I were the U.S. distributor, I would try to get the movie out before Mission: Impossible - Rogue Nation (the fifth in that series) to capitalize on audience confusion over the title MI-5 (which is of course derived from the name of the British Security Service, and has nothing to do with Mission: Impossible, which it pre-dates by more than five decades). From the poster, which uses imagery, colors and fonts similar to the various Mission: Impossible campaigns, it looks like Saban are doing just that. But coming well after Rogue Nation's hit theatrical run, it seems like they're trying to capitalize on that film's home video release instead. (Rogue Nation hits Blu-ray and DVD on December 15, and MI-5 hits theaters December 4.) I hope that scheme doesn't rub people the wrong way, because MI-5/Spooks was a fantastic TV show and therefore I am certain that the movie will be much, much better than the sorts of similar title cash-ins like Transmorphers released by The Asylum with the specific intention of confusing Grandma during her Christmas shopping.

Peter Firth (The Hunt for Red October) and Lara Pulver (Fleming) return as spymaster Harry Pearce (the only star to remain through all ten seasons of the TV show) and agent Erin Watts (introduced in the final season), respectively, and Tim McInnerny reprises his recurring role as Oliver Mace. The rest of the cast is filled out by newcomers to the franchise, led by Kit Harrington (Game of Thrones). Jennifer Ehle (Zero Dark Thirty), David Harewood (Homeland), Elyes Gabel (Exit Strategy) and Tuppence Middleton (The Lady Vanishes) round out the ensemble. The strategy of bringing in Harrington as the new star instead of bringing back one of the few survivors of the series (which had a remarkably high mortality rate among its leads!) is clearly designed to make the film accessible to new audiences, while still rewarding seasoned viewers. From this trailer, it really looks like the film manages exactly that! I can't wait for the opportunity to finally see this movie!

MI-5 opens theatrically on December 4, but will be available on DirecTV in an exclusive window beginning a month sooner, on November 5. Watch the trailer below: