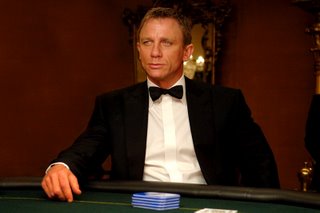 1. Daniel Craig
James Bond is the granddaddy of them all. It was Bond that made me as spy fan, and without 007 there probably wouldn’t be half the other spy stuff there is out there.

James Bond is everywhere right now, mainly because Eon’s new movie of Ian Fleming’s first Bond book, Casino Royale, is due out in just over a month. There’s even more buzz than there usually is over a new Bond movie because, as anyone who hasn’t been under a rock for the past year knows, there’s also a new Bond. Daniel Craig is going to show us what he’s got up his sleeve as Fleming’s quintessential superagent.

And he’s the elephant in the room of anything calling itself a spy blog, so I guess I better say how I feel about Mr. Craig. I say, wait until November 17. That’s when we’ll know.

I loved Brosnan, even though his last two Bond movies were sadly among the worst in the series. Despite the material, he got better and better with each movie. I think he’s a really gifted actor who did a great job in the part and does an even better job in his sleazier, non-Bond roles. Last year he got a Golden Globe nomination and probably should have gotten an Oscar nomination for his perfect comic performance in The Matador. He played a similarly amoral riff on his Bond persona in my favorite Pierce Brosnan movie, The Tailor of Panama (based on the John LeCarre novel). He’s a great actor who keeps getting better, and is at the height of his game. I think, like Sean Connery, he’ll end up playing some of his greatest parts in his more mature, post-007 years. He still looks great and I think he had another Bond movie yet in him. (He’s still younger than Roger Moore was when he shot his last Bond movie, and in better shape.) But the producers decided to go a different direction, so it’s no use crying over spilt milk. (The saddest part is that, if media reports are anything to go by, ol’ Pierce seems to have been rather unceremoniously dumped, which is too bad.)

So now we’ve got Daniel Craig. Let’s not judge him in advance. I think that whole "Craig not Bond" stuff the media made such a big deal of a few months ago is bullshit. We haven’t seen him as Bond yet! How can you say he’s not Bond? Yes, it’s true that he’s not traditionally handsome, but then again it could be argued that Brosnan was too much of a pretty boy. I can see why they want to go in a different direction, especially if their angle is to make Bond "grittier," as it seems to be.

Ian Fleming’s Casino Royale is a pretty dark, somewhat gritty novel, so that makes sense. Why couldn’t they have gone that direction with Brosnan? The shot in the trailer that seals it for me is the one where Craig jumps out the window going after the baddie. Just look at the way he goes through that window! Can you see Brosnan doing that? That’s not the way he moves. It takes a younger man to be so physical, and it makes for a cool shot.

So I say give Craig a chance. I’m optimistic about him. The posters look great, the trailer looks AMAZING (the best Bond trailer since that glorious original Goldeneye teaser more than a decade ago!), and the buzz in the movie’s pretty good.

Why do I love that poster so much?