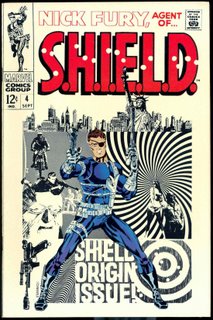 4. Nick Fury
Speaking of comic books (see previous post below).... Nick Fury is the ultimate comic book spy. A spy sooooo far removed from the realism of Tara Chace in Queen & Country it’s impossible to compare them. Fury at his finest out-Bonds Bond in terms of outlandish gadgets and over-the-top scenarios. (The "finest" I speak of would be Jim Steranko’s classic pop art Sixties run on the character, collected in two trade paperbacks from Marvel.) But the Fury of the current Marvel Universe is a little more Smiley than Bond... if you can possibly imagine Smiley in a jumpsuit.

Fury is (or was, until quite recently) the head of SHIELD (which stands for something... but it hardly matters what), a spy agency answerable to the United Nations. While he hasn’t been out in the field in his own adventures much lately, he’s really been the puppetmaster of the Marvel Universe, pulling all the strings behind the scenes. He’s currently sitting out Marvel’s big "Civil War" all-universe event (which, like 52, I too am sitting out), but I have a feeling he’ll play a big role in its aftermath.

So why is he on the currently relevant spy list if he’s lying low at the moment? Just because he’s become so prevalent in the modern Marvel Universe. (And also in the "Ultimate" universe, where for some reason his alternate self looks and sounds like Samuel L. Jackson.) He’s an enigmatic, eye-patched figure, capable of being a real bastard. He’s recently been seen tricking or coercing superheroes into serving his agenda in titles like Astonishing X-Men, Black Widow, New Avengers (no relation to the TV show, the real New Avengers!), Ultimate Spider-man and the abysmal "Secret War." No matter how much of a son-of-a-bitch he is, he remains the epitome of cool as a non super-powered guy who manages to bend a universe full of costumed heroes to his will through cloak-and-dagger means.

Fury’s very best recent portrayal was actually in another "alternate universe" kind of title, Neil Gaiman’s Marvel 1602 which recasts the Marvel heroes in Elizabethan times. I know, it sounds silly, but Gaiman is a top talent and he really makes the book work, especially in casting Fury as a Francis Walsingham-like spy chief to Queen Elizabeth I.

Fury changes a lot in the hands of different writers. Some use him as an authoritarian, almost fascist voice of Bush Doctorine, post-911 Big Brother spy agencies. Others cast him in just the opposite role, as a voice of sanity who stands up for the Intelligence community against politicians and Rumsfeldesque militarists who would rather the intel suit their agenda than be accurate. While some of the more liberal rants do sound a bit odd coming from a military careerist-cum-spy chief (no matter how much they ring true), the character always remains the badass epitome of cool in the Marvel Universe.

He may not have his own book anymore, but he’s more omnipresent than ever in Marvel titles.