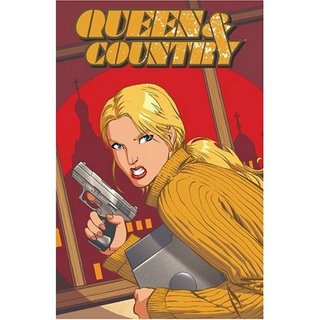 3. Greg Rucka
Thank God Greg Rucka’s once again relevant enough to make this list! How did it happen? A new issue of his spy comic book Queen & Country finally came out this week! If that doesn’t excite you, then you’re really missing out. Queen & Country is the best current, ongoing spy saga in any medium. It’s a supposedly bimonthly (but really more like tri-monthly or quarterly) black and white comic put out by indie publisher Oni Press. Story arcs typically run four issues or so, and once they are finished they are collected into a trade paperback. There are currently about eight or nine volumes, I think, counting the Declassified stories. There are also two amazing Q&C novels, A Gentleman’s Game and Private Wars.

Q&C is not in the James Bond family of spying. It’s a "realistic" kind of spy story, set firmly in the real world, owing more to Deighton, LeCarre, and, most of all, the gritty 70s TV series Sandbaggers than to Ian Fleming. The heroine is Tara Chace, one of three "minders" for MI6. That’s the "special section." (Why are there always three in the fictional special section? Three 00 agents in Fleming, three Sandbaggers, three minders... Either they’re all inspired by each other or else somebody found a grain of truth and latched onto it.)

A typical Q&C story half focuses on Tara out in the field in some topical hot spot (yeah, that’s "topical," not "tropical." Remember, it’s not Bond!) and half focuses on her superior, Paul Crocker, the cynical, aqualine Director of Operations for SIS. (Yes, it’s exactly the same formula as Sandbaggers. Some people have even speculated that it’s intended to be a "sequel" of sorts. The similarities don’t detract from either series; both are utterly brilliant.) As Chace navigates the dangers of her mission, Crocker navigates the equally treacherous corridors of political power in Whitehall and MI6 Headquarters. It’s a testament to Rucka’s writing that I’m usually even more captivated by Crocker’s storyline. It takes real talent to mine such great suspense from office politics and bureaucracy. If only 24 could get that right! Rucka shows that you can get intense drama out of actual, realistic office politics at a spy agency. Yet on 24, they don’t even try. Instead, they resort to soap opera theatrics and repetitive pissing contests to generate tension at CTU, and every time the show cuts from Jack Bauer back to CTU, it loses me. Rucka actually makes the office politics the most interesting part!

Of course, it helps that he crafts some of the most lifelike characters in all spydom, real people with real issues trying to do the best they can at an unusual job. Read the first several arcs of Q&C and you’ll be hooked. You’ll so quickly be invested in Tara, Crocker and the supporting characters that you can’t possibly get enough of them!

Which is the problem.

Rucka is a very busy writer. In addition to putting out one novel a year (this year it was one in his "Atticus Kodiac" mystery series instead of Q&C), he’s probably DC Comics’ most prolific writer. And unfortunately he’s embroiled in their ambitious 52 project, which chronicles an entire year in the DC universe week by week. (He’s also writing CheckMate, a comic that tries to do "Queen & Country in the DC Universe," but I gave up after a few issues because unless you follow every DC title religiously, trying to keep up with the convoluted politics of the DC Universe is even harder than keeping up with the real life global politics that serve as a backdrop to Q&C!) I’m sure that he does a good job with that stuff, too, and I’m sure there are grateful DC junkies, but I’m not one of them. I selfishly keep hoping he’ll turn his back on Batman and friends to give us monthly Queen & Country again!

That’s the frustrating part. The comic book comes out so infrequently these days that it’s next to impossible to keep up with the complex storyline from one issue to the next. For that reason, I recommend reading the series in trade paperback collections instead of individual issues. Buy the first two volumes together, and you’ll breeze through them. Read them in order, pausing to read Declassified Vol. 1 between Q&C vols. 4 and 5. Continue in order, and then read the novels in order after you’ve read all the currently published comics. Trust me, if you’re a spy fan, you’ll be rewarded!