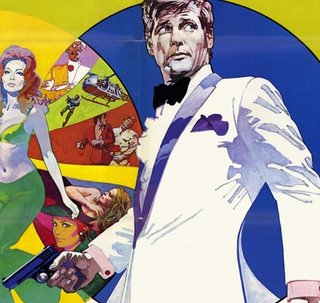 2. Roger Moore
Why Roger Moore, you ask? Why is he the only other Bond on this list? Well, the list is of people who are of some spy-related importance right now, and Sir Roger makes the cut because he is the only former Bond to have recorded new audio commentaries for MGM’s big Bond DVD re-release.

The new discs hit November 7 to coincide with Casino Royale. MGM dvds are now distributed by Fox Home Entertainment, and Fox is also treating spy fans to their "Classic Spy Collection" that same day, including Quiller and Flint and some great cover art!

Speaking of cover art, 007 didn’t fare so well. Companies like Fox and Warner have learned the value of releasing their classics with original poster art, and have produced some fine, eye-catching DVDs. 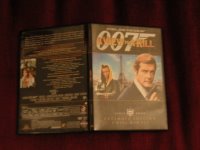 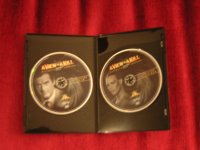 MGM, unfortunately, is still working on their lackluster Photoshop skills for some reason. They have at their disposal some of the very best poster art ever created
and instead they used poorly done photo montages. What the hell???

At least the discs are housed in slimcases, which greatly cuts down on the shelf space from the last Bond release. The slimcases are inside a kind of neat "magazine holder" style inner case, which slides into a sturdy, glossy cardboard outer slipcase.

The cases for the first two volumes, one gold and one silver, are attractive at first glance, but exhibit some weird choices as to photos used. For example, Goldie (that 90s trip hop artist who played a very minor baddie in The World Is Not Enough in a bit of stunt casting no one really cared about?) ends up the most prominently pictured actor on Set 1, moreso than any Bond actor or any of the beautiful women. Huh? The discs are also randomly assembled, so that Set 1 contains an odd assor 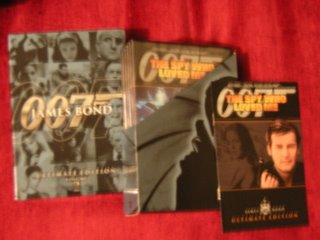 tment of Connery, Moore, Brosnan and Dalton, but not the first movie, Dr. No. Or even the second. So it will prove confusing each time you go for a specific Bond movie, and have to figure out which set that particular one is in.
But enough with the negative. The new discs themselves are amazing! The picture quality is the best it’s ever been on Bond, and they retain all the special features of the last batch (including the wonderful documentaries on each film) plus great new ones. And, of course, the Roger Moore commentaries.

Sir Roger is one of the great DVD commentators. His tracks on episodes of his two best TV series, The Saint and the fantastic, underrated The Persuaders! are first rate. He and his producing partners Johnny Goodman and Robert S. Baker provide commentaries that are both informative and entertaining. Ol’ Rog is very funny, usually in a self-deprecating manner. And he has an amazing memory! He knows every actor’s name, even in the smallest of parts, and what happened to them and where they are now. Therefore you’re never faced with those lengthy discussions you sometimes get where older commentators try in vain to recollect someone’s name, or endlessly debate whether or not the person is still alive. He finds tactful ways to give us a bit of gossip on them (usually to do with drinking problems, it seems) and never takes himself or the material too seriously. So, based on those other tracks, Moore’s commentaries were probably the number one reason I’ve been anticipating these new DVDs.

I haven’t had the chance to listen to much of them yet, but based on a few minutes of The Spy Who Loved Me, he doesn’t disappoint. I think it was a mistake to let him go it alone, because the give and take with Baker and Goodman was part of the success of the Persuaders! tracks. If they’d gotten Michael G. Wilson or Barbara Broccoli or even a moderator to join him, it might have turned out a little better and filled the occasional gaps. Or perhaps they could have gotten production designer extraordinaire Ken Adam to record with him. Adam provides entertaining commentaries over his home movie footage elsewhere on the discs, and Moore mentions having a great relationship with him on his track. Had the two old buddies gotten together to remember, I think it would have been a good time for them and for us. And it’s definitely a missed opportunity not to have the incomparable, always entertaining Christopher Lee accompany Moore on The Man With the Golden Gun. Oh well. Like, I say, Moore doesn’t disappoint anyway. He’s still as droll as ever and offers up the same kind of anecdotes about bit players he did on his other commentaries. I can’t wait to listen to them all at length.

Moore’s also on my brain right now because I’ve been watching a lot of Saint episodes lately, some of the black and white ones I hadn’t seen before. Australia’s Umbrella Entertainment has put out top quality DVD sets of The Saint and just about every other Sixties ITC show. I was able to pick up the first set at a ridiculously cheap price, and have been enjoying all the extra features (like the aforementioned commentaries) that it offers that the bare-bones A&E sets here in the States don’t. (Of course, now there are two massive sets out from Network in England that include all the Australian bonus features plus brand new, full-length documentaries! If only I could afford them...) I enjoy The Saint a lot, and contrary to most fans I think I prefer the color episodes just a bit. But for me, Roger’s TV masterpiece is his early Seventies team-up with Tony Curtis, The Persuaders! (Yes, the exclamation point is part of the title.) If you’ve never seen this show and you’re a fan of spy/adventure shows, you owe it to yourself to check it out. A&E have released it in two good volumes here in the USA, including some of those exemplary Moore commentary tracks. Network seems to have just put out the definitive version in the UK with loads more features, but importing it is naturally expensive, so I haven’t seen it.

The Persuaders! is silly, it’s generally mindless, and it’s bogged down in truly hideous Seventies fashions (actually, that’s part of the fun) but it is a pure joy to watch. Relentlessly entertaining! The whole thing depends on the pitch-perfect chemistry between Moore and Curtis, which is so undeniable on screen that I find it really hard to believe that it supposedly... wasn’t... off! Other key factors in the series’ success are the gorgeous European locations (none of that Saint grainy stock footage establishing shot followed by obvious studio backlot business here!) and a parade of recognizable guest stars like Terry-Thomas, Ingrid Pitt, Ian Hendry and Susan George, to name a few. Definitely start with the pilot episode. It really establishes the characters’ relationship for future episodes to build on, and it’s got a great split-screen race through the winding roads of Monaco between Moore’s Aston Martin DBS and Curtis’s Ferrari Dino! (Echoed, probably unintentionally, by the Aston/Ferrari race in the same location in Goldeneye decades later!)