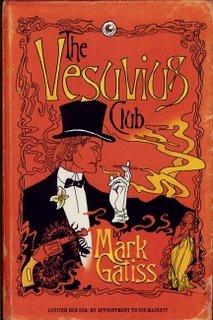 Speaking of British TV comedians (See Charlie Higson below)... I have seen League of Gentlemen. (Not to be confused with the horrid Sean Connery movie based on the sublime Alan Moore comic League of Extraordinary Gentlemen.) LoG is a wonderfully deranged, side-splittingly sick little British sketch comedy show that developed into so much more. But it has nothing to do with spies. (Well, that’s not quite right. There are a lot of little spy references sprinkled throughout the show, like a pair of workmen named Wint and Kidd... but it’s got next to nothing to do with spies.) But one particular member of the trio of gentlemen seems to have a lot to do with spies lately...

Mark Gatiss is the tall skinny one. If you’ve seen the show, you probably know him as Hillary, the butcher. (Who, he revealed in a radio interview, was named after Sir Hilary Bray, so there’s another spy connection.) Outside of LoG, Gatiss is a very prolific writer and fan. He wrote some episodes of the new Dr. Who series, and also wrote the novel The Vesuvius Club: A Bit of Fluff. And what a wonderful bit of fluff it is! The Vesuvius Club is the first in a planned series of novels about Edwardian dandy-cum-spy Lucifer Box. The second, The Devil In Amber, is apparently already completed and due out in November in the UK and January in the US.

According to old interviews, Gatiss plans to do a Lucifer Box trilogy. The first book is Strand Magazine style Victorian/Edwardian adventure, a (sort of) send-up of Sherlock and Mycroft Holmes and Fu Manchu and all that. The second, set a few decades later, will be Gatiss’s take on John Buchan/Sapper sort of pre-war spy stories. And the third is supposed to be set in the early Fifties when Lucifer is quite old and be a Casino Royale-inspired Ian Fleming sort of tale!

Gatiss is evidently quite a fan of all of these types of story. The Vesuvius Club is not a parody, but a genuinely thrilling page-turner in its own right which happens to also be quite funny. It’s not an Austin Powers-like spoof of the genre, more a loving pastiche. (A lot like that other brilliant British TV comedian’s spy novel, The Gun Seller.) The humor doesn’t come from turning the cliches of the genre on their end, for the most part, but reveling in them. In every sentence it's clear how much Gatiss loves this stuff, and its just as much fun to read as he clearly had writing it.

The general idea seems to be that this could be an actual, long-lost book originally written in Edwardian times. Even the design of the book lovingly reflects this. The British hardcover (well worth tracking down for a book-lover) bears a dust jacket meant to look aged and creased, like the battered cover of a volume you found in a used bookstore. There’s even a bookseller’s price "pencilled" in on the inside flap. Beneath the jacket, the cloth cover itself is stamped with the period-style cover illustration. And the endpapers bear fake ads like you might have found in the Strand Magazine or "penny dreadfuls." (Strangely, Alan Moore’s aforementioned League of Extraordinary Gentlemen also did this!) Chapter headings begin with a large, ornate capitol letter. And there are a few full-page illustrations scattered throughout.

The American paperback edition also maintains this spirit. The cover isn’t as wonderfully garish, but it’s still charming. The full-page illustrations are gone, but instead we get entirely new chapter illustrations by the same artist.

Of course, the book isn’t entirely an accurate artifact of its period. [Minor spoiler alert!] In an interesting twist, Lucifer Box is bisexual, something that never would have seen legitimate print at the time! [Spoiler over.]

Based on the cover image on Amazon.co.uk, The Devil In Amber will continue the period-appropriate dust jacket art. It easily looks like a 1920s or 30s book! There was also a graphic novel version of The Vesuvius Club, illustrated by the same artist who did the spot illustrations for the book. It’s a fun supplement to the novel, but unfortunately cuts far too much out. I wouldn’t recommend reading it instead of the book unless you’re just dead-set against words. There’s an abridged audio version performed by Gatiss, which I imagine would be a lot of fun, based on his radio work, but I haven’t heard it.

Mark Gatiss’s spy connections don’t end with his books. A clear lover of both Edwardian adventure (supposedly he dressed only in fashion of the period for a whole year) and Sixties British TV, it’s not surprising to see him pop up on the special features of the recent Adam Adamant Lives! DVD.

Released only in England so far, this extremely well put-together set collects every surviving episode of the BBC series on five discs. Adam Adamant was the BBC’s bla 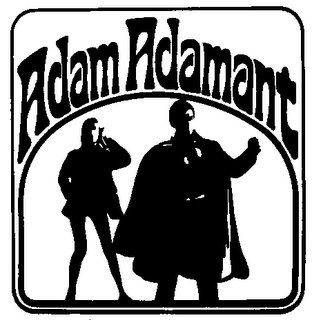 ck and white answer to ITV’s The Avengers, and they take the formula a step further. Instead of merely behaving like an Edwardian gentleman like John Steed, Adamant actually is one! He was frozen and then thawed out in Swinging London, and paired with a young, hip female sidekick.

The episodes I’ve watched so far are hugely entertaining. I’ve heard about this series for years and always wanted to see it, and it lives up to all of my pre-conceived hype. If you like The Avengers, definitely seek out Adam Adamant. It’s by far one of the very best of the many, many Avengers wannabes that came along in the Sixties. (Avengers mastermind Brian Clemens even writes an episode!) I haven’t gotten to it yet in my viewing, but at least one episode is directed by a young Ridley Scott.

The DVD set also includes an exhaustive 64-page book by Andrew Pixley on the history of the series. Well beyond a simple episode guide, I can’t possibly call this tome a "booklet" as they do on the back of the box. It could have easily been published on its own if the market actually warranted such a book, which, sadly, it probably doesn’t. The book is illustrated with color and black and white stills. Due to the BBC’s policy of "wiping" old programs to save room in their tape vaults, about half the original episodes were regrettably lost. Fortunately, their scripts are included here as PDFs on the DVD ROM features, along with full PDFs of Adam Adamant comics, stories and annuals. And, finally, there are commentaries with the original cast and an hour-long documentary and featurette hosted by Gatiss. Great spy show!