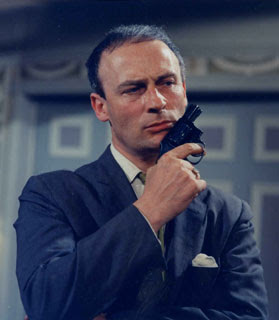 2010 is already shaping up to be a great year for spy fans. UK company Network has announced that they will release the surviving episodes of the first two black and white seasons (1967-69) of the stellar Edward Woodward spy series Callan on DVD (Region 2, PAL) for the first time ever in February! Seasons three and four, shot in color, have previously been available in England (where they're now out of print) and Australia, and the first color season made its long-awaited Region 1 U.S. debut this past summer courtesy of Acorn Media (review here). Set 2 (the fourth season) comes out in January. But the monochrome episodes have never been officially available in any country before; they've only circulated as bootlegs. So this is big news! From Network's announcement:

After many years spent trying to untangle the Rights situation for the first two series [seasons], we can now announce that February will see the release of Callan: The Monochrome Years (4 disc set, RRP £29.99).

This set contains the original Armchair Theatre pilot play, A Magnum For Schneider, along with all the remaining black and white episodes from series one and two - the majority of which have been unseen in nearly forty years and are available here on any format for the first time.

Utterly fantastic! The original pilot plus all the surviving episodes! (Several episodes were "wiped," or erased, a standard–and unfortunate–practice in British television at the time.) Network's announcement concludes by adding that "Callan: The Colour Years, comprising series three and four, is currently scheduled to be released in May 2010." That will put Britain back up to speed on those series, and mean that all four seasons will be available in Callan's homeland next year. There's no mention now of the theatrical film Callan or the TV reunion episode Wet Job, but maybe Network will be able to include them as extras on the color set. Fingers crossed!

Hopefully this news will also pave the way for Acorn to be able to release the black and white episodes for American fans in the near future.

Read my review of Callan: Set 1 here.
Read my obituary of the recently departed Edward Woodward here.
Posted by Tanner at 4:25 PM

This is great news and I was chuffed when In got the email from Network in the week.

btw, I have a DVD copy of Callan (the movie) that I found in a UK shop called Poundland some time last year (along with Breaker Morant). As the shops name suggests it cost me £1, which was a great surprise as I would have happily paid full price for it!

In Australia, the Callan movie was bundled with the Season 4 disks (Umbrella also released in separately).

Yeah, I've got the Australian version on its own. For a while Umbrella was the only way to go to see any Callan at all, since it was OOP in England and never available until this year in America. I'd forgotten the movie was released in the UK. That's quite a deal you got, David! (First David, that is!) Going by Amazon, the UK version is now out of print, so hopefully Network will be able to buy up the license... Mainly, I'd really like to see every bit of Callan collected together in sets by the same company, be it Network or Acorn or new versions from Umbrella. (Ideally ALL of them, so people in any continent can get what they need without having to import!) And I'm pretty sure Wet Job has never been released officially anywhere (or was it also on the second Umbrella set, Second David?), although it was posted on YouTube at one point. (Maybe still is.)