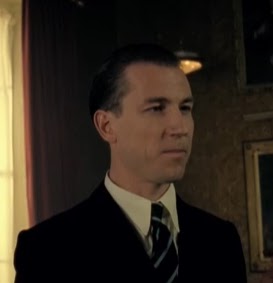 Early last year, we learned that Britain's Channel 4 was making a miniseries based on William Boyd's novel Any Human Heart, which features Ian Fleming and other historical figures as a supporting characters. At the time, there was no information on who would play Fleming and the project fell off my radar.  It played in the UK last autumn, but I didn't read anything about it at the time.  Now Any Human Heart will air in the US on PBS's Masterpiece (just coming off the truly fantastic Downton Abbey) in three parts beginning this weekend.  And James Bond author Fleming (in his wartime Naval Intelligence days) is played by Tobias Menzies, the actor who played M's assistant Villiers (sort of a mash-up of Moneypenny and Bill Tanner) in Casino Royale!  He also narrated a number of remarkable "background materials" in a dossier telling the story of Daniel Craig's Bond's pre-00 career on that film's website. Menzies is probably most famous in America, though, for his role as Brutus on HBO's Rome.  I wouldn't have pegged him as Fleming, but I have to admit that he does kind of look the part in that still from the series. 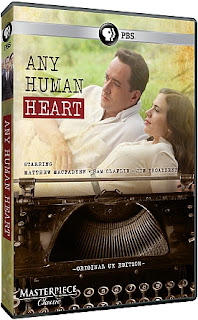 Any Human Heart follows a writer named Logan Mountstuart as his life intersects with a number of famous figures, including Fleming, Ernest Hemingway (Julian Ovenden), Wallis Simpson (Gillian Anderson) and her husband the Duke of Windsor (Tom Hollander). Mountstuart is played at different points during his life by Sam Claflin, Spooks/MI-5's Matthew Macfadyen and Jim Broadbent.  Hayley Atwell (one of the few highlights of the 2009 Prisoner remake) also stars.  I believe that Menzies' Fleming will only appear in the second segment, when he assigns Macfadyen's Mountstuart to a wartime spy mission involving Wallis and Edward, but I could be wrong.  (Mitch Silver's novel In Secret Service, published after Boyd's, also concocted an espionage plot involving Fleming, Simpson and the former monarch... though not very successfully.)  The first part airs this weekend on most PBS stations, but you'll have to check your local listings. After that, it should be available to watch online on the Masterpiece website for a while, and the DVD comes out on April 5. You can watch a short trailer on the Masterpiece website.
Posted by Tanner at 6:19 PM