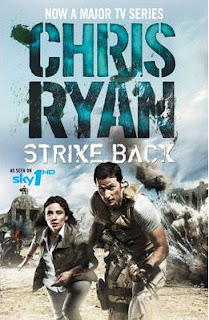 According to Deadline, HBO's sister network Cinemax is finally entering the original scripted television arena that's been so profitable for other pay cable channels.  Only their new "scripted original" isn't that original; it's a remake of a UK spy series that debuted last year, Strike Back.  The British Strike Back was a 6-episode series for the Sky satellite network based on a novel by former SAS operative Chris Ryan.  This is actually the first I've heard of it, but it sounds pretty good, like an attempt to revive the tough guy action genre of The Professionals or Saracen. In that version, Richard Armitage switches allegiances from MI-5 (Spooks) to MI-6 as John Porter, an ex-SAS man turned agent for MI-6's Section 20. The show was shot in South Africa, whose deserts doubled for Iraq, Zimbabwe and Afghanistan.
For the American version, Cinemax will team up with Sky to produce a 10-episode series (inspired by the television format, and not the original novel), again shooting in South Africa (as well as Hungary).  Armitage will not be involved. Instead, the Antipodean Sullivan Stapleton (Animal Kingdom) will play Damien Scott, "a charismatic former U.S. Special Forces operative who teams up with a British military unit led by Section 20 officer Michael Stonebridge (Fringe's Philip Winchester) to stop an international terrorist group." Daniel Percival, who directed the bulk of the original Sky series (as well as other spy stuff like The State Within and Dirty War), will be involved with the new version in a directing capacity as well; X-Files vet Frank Spotnitz and EastEnders writer Richard Zadjlic (huh?) are the showrunners.

So... the new series is a US/UK co-production that retains some of the original creative team, but not the lead actor or lead character?  And instead of replacing him with an American, they replace him with an Australian playing an American?  Who's still working for MI-6, and not for an American covert squad? That's... weird.  Why not just stick with Armitage?  It's not like Sullivan Stapleton is any better known here in the States.  I'm not quite sure if this series is supposed to occupy the same world as the original one.  Perhaps there's the prospect of crossover down the line?  If it's not the same world, I would think it would be confusing when co-producer Sky airs the new version.  And what does this mean for a potential second series of Armitage's version?  I guess we'll have to wait and see.  In the meantime, I'm going to make sure to check out the first one, which is available on PAL DVD and Blu-ray from Amazon.co.uk.  Mind you, I'm not complaining about the new one, just making observations. In my book, there's always room for a new spy show on American television--especially one shot on location in Europe and Africa!

I reviewed the original a little while ago. It started off okay for the first story but got progressively stupider for the second two as Jed Mercurio became less involved in the writing. Shame Armitage isn't going to be in it, but I imagine he's going to tied up filming The Hobbit for the next year or so.

Wow, I sure disagreed about it getting worse as it went on! I'll give you that the second story was definitely the weakest, but I thought the third was far and away the best! It was certainly the strongest SPY story, and that appealed to me, but I thought it was also a fantastic culmination of what had gone before.