Book Review: The Last Run: A Queen and Country Novel by Greg Rucka 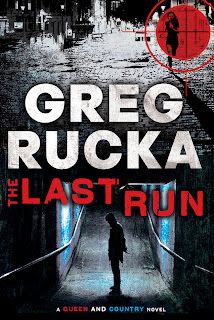 With his third novel in a franchise that also comprises an ongoing series of comic books and several mini-series (all conveniently collected into four omnibus-sized volumes), Greg Rucka happily maintains the high standards that Queen and Country fans have become accustomed to and then some. I would have been happy just to have these characters back after too long an absence from both bookstores and comic book stores, and might have settled for something less—but fortunately I didn’t have to. The Last Run is a fantastic spy novel, and probably the second-best in the saga so far, closely following A Gentleman’s Game. (And the second book, Private Wars, was no slouch either.) A familiarity with the previous novels or comics is not necessary to enjoy this book, as Rucka concisely reintroduces all of the major characters quite effectively—which is handy even for a longtime fan, since it’s been so long since we’ve enjoyed the company of Tara Chace, Paul Crocker and the rest of Rucka’s SIS crew. (However, if you have read the rest of the series, you’ll be rewarded with some rich payoffs to character arcs and political machinations that have been percolating for its duration.)

Tara Chace is Minder One, the head of the SIS’s Special Section. (Rucka’s minders are roughly the equivalent of Le Carré’s scalp hunters, Fleming’s Double O’s or—most directly—The Sandbaggers’ sandbaggers.) But her operational shelf life is fast nearing expiration. Aging roughly in real time since the beginning of the series, she’s been at it for over a decade, which is far longer than most agents are kept in the field in Rucka’s world. (And very probably in real life, I’d imagine.) Furthermore, she’s a mother now, and she doesn’t like leaving her daughter Tamsin for long periods of time—with no certainty of ever returning. Particularly poignantly, she’s forced to leave Tamsin in the arms of a babysitter while the child has the flu and is running a high fever as Tara embarks on her final mission. And it’s never in any doubt that this is, indeed, her final mission—one way or another. That doesn’t give anything away; Rucka makes that clear from the earliest chapters if not the title itself. Tara Chace submits her resignation to Paul Crocker, the Director of Operations (D-Ops), but considerately agrees to stay on until a suitable replacement can be found. She soon comes to regret that consideration, however, when the head of the service, C, insists (at the unappreciated behest of the CIA) that Minder One take on a potentially suicidal mission into Iran that seems suspiciously like a trap.

In all of his novels, Rucka divides his chapters between Tara’s point of view, Crocker’s, that of a supposed ally and that of a supposed enemy. (Forgive my vagueness, but to reveal who is actually what in books like these would be, in the words of The Prisoner’s Number 2, telling. Perhaps the characters are exactly as they appear, and perhaps they are not. Readers of Rucka’s past Q&C novels know it can go either way.) In The Last Run, the new characters are SIS’s newly-posted Tehran Station Number Two, Caleb Lewis, and Youness Shirazi, the head of Iran’s secret police, VEVAK, who spends much of the story pursuing our heroine. In every Rucka novel I begin by sighing when I come to a chapter focusing on one of these non-regulars and thumb ahead to see how many pages I’ll have to go until I get back to my favorite characters, and then very quickly I come to welcome the new characters just as much. In the comics, Rucka is limited by the space constrictions of the medium and can’t afford to spend so much time developing his antagonists. Those stories work wonderfully sticking to the POVs of Tara and Crocker, but the addition of other points of view differentiate the novels enough to make them a unique reading experience in the series—and to justify using two different mediums to tell his stories.

The too-good-to-be-true bait that Crocker reluctantly sends Tara after is a high-level would-be defector: no less a personage than the nephew of the Ayatollah himself. The Iran setting provides not only a backdrop torn directly from the headlines (as they say), but also the best opportunity to tell a Cold War-style spy story in the vein of Smiley and Samson in a modern context. In his (quite brilliant) short story “Section 7 (a) (Operational),” Lee Child pokes fun at the ubiquity of Iran-related plots in contemporary spy novels. But in The Last Run, Greg Rucka ably demonstrates all the advantages of setting a spy story in that country. It’s the closest scenario in today’s world to the European chessboard Len Deighton and John Le Carré once moved their pieces around. When the mission predictably goes to hell, Tara finds herself alone in a hostile country being pursued by VEVAK, the military and the regular police. Yet it’s a country she was able to travel freely into under non-diplomatic cover—and even blend in. How many other countries in the news today could a blond, female, Western spy believably do that in? Rucka handily puts a contemporary spin on all of my favorite Cold War tropes: the ambiguity of a defector (is he for real or not?), the embassy as refuge, imperiled networks and dead drops, the agent on her own behind enemy lines, the run for the border and ingenious crossings thereof. The Last Run has all that in spades.

As usual, poor Tara is put through the ringer. More than ever before, though, there is absolutely no certainty that she will come through it all. We know from the start that it’s her last run, but that can mean several things… and Rucka has shown time and again that he’s not above killing off main characters in this series. Meanwhile, as usual, Paul Crocker has his own battles to fight at home, and his navigation of the Whitehall bureaucracy is often as perilous in its own way as Tara’s flight from authorities in an unfriendly land. Paul Crocker is Rucka’s greatest creation, and I could easily read a whole novel (or comic) just about him… but it’s probably more fun to jump between the field and the office, as we do in Queen and Country.

If The Last Run has a flaw, it’s that the ending—whatever happens—is all too abrupt. While all the primary plot threads are resolved, I’d like to have known more about how some of them were wrapped up. But thanks to the point of view we see them through, that’s not possible. I closed the book with questions—not the sort that fuel my already eager anticipation for the next book or comic, but the sort that pertain specifically to the one I just finished and are unlikely to be addressed in the future. But that’s a minor complaint. The Last Run is a clearly well-researched and utterly thrilling read sure to satisfy fans of both the Desk and Field sides of the spy genre. I honestly can’t recommend this whole series highly enough.
Posted by Tanner at 12:51 AM