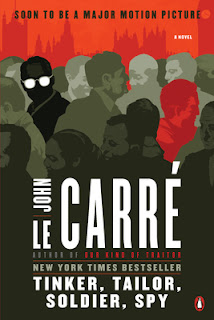 In George Smiley's first appearance in Call For the Dead, John le Carré described his most famous creation in a rather unflattering manner: "Short, fat, and of a quiet disposition, he appeared to spend a lot of money on really bad clothes, which hung about his squat frame like skin on a shrunken toad."  Yet now, thanks to artist Matt Taylor, Smiley is undergoing an uncharacteristically stylish upgrade.  In a move that surprised the book industry, le Carré defected from long-term publisher Hodder and Soughton to Penguin in 2009. Part of the new publisher's appeal to the author was said to be the chance to occupy the same roster as his literary idols, Graham Greene and Joseph Conrad, both of whose catalogs are very handsomely maintained by Penguin. Ironically, another spy author whose company the move puts him in is Ian Fleming. "I dislike Bond. I'm not sure that Bond is a spy. I think that it's a great mistake if one's talking about espionage literature to include Bond in this category at all," le Carré told an interviewer in 1966... though he later conceded that his reactive statement may have been a tad harsh. Penguin have been the stewards of Fleming's Bond books for the last decade now, and expertly shepherded them through a succession of classy reissues on both sides of the pond. No matter how le Carré feels about Fleming, one can't help speculate that 007's treatment in the hands of Penguin may also have played a part in his decision to make the publisher his new home. 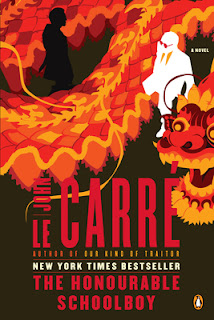 Now, in anticipation of the new film version of le Carré's seminal work, Tinker, Tailor, Soldier, Spy (see today's earlier post), Penguin have unveiled a series of Smiley reissues just as striking as their Bond covers. On June 7 they'll release the first two books in the "Karla Trilogy" (Tinker, Tailor, which earns a "Soon to be a major motion picture" banner, and The Honourable Schoolboy) with colorful new covers by Taylor, who also provided artwork for the recent paperback edition of le Carré's latest novel, Our Kind of Traitor. The third volume, Smiley's People, follows on June 28. After that, the reissues continue with non-Smiley works The Little Drummer Girl (the same day as Smiley's People), A Perfect Spy and The Naive and Sentimental Lover (both in late July). 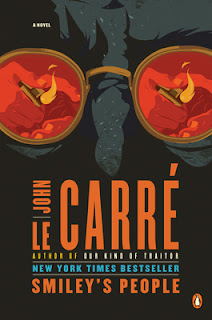 These three novels are not the only ones featuring George Smiley, but they are the best and the most substantial—and they form the core not only of le Carré's body of work, but of the Espionage Canon as a whole. This trilogy is absolutely essential reading for anyone with even a passing interest in the spy genre. (I'm praying that the new Tinker, Tailor movie will prove successful enough to merit film versions of all three novels; I'd love to see The Honourable Schoolboy filmed!) All three books will also be issued as eBooks the same day. Unfortunately, there's no way of telling from Penguin's website if the author's introductions from the Scribner editions (penned in the 1990s) will be included in the new reissues. I suppose it's possible that those might belong to the old publisher like special features on a Criterion DVD that fail to appear on a subsequent studio version. I do hope they're included, because I've found all of them to be insightful supplements to the novels. For constant coverage on all things Smiley, I recommend the relatively new website SmileyWatch (linked on the right of this blog), who first reported on Tinker, Tailor's new cover back in April.
Posted by Tanner at 9:08 PM