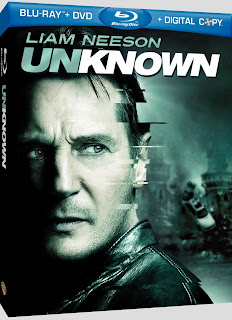 Blu-Ray Review: Unknown (2011)
The theatrical marketing campaign for Unknown was determined to convince audiences that it was Taken in Berlin. While I can see why Warner Brothers would be keen to piggyback on that massive hit with the same star in a similar European setting, ultimately I think the comparison did their movie a disservice. Unknown is not Taken 2, and fans expecting the sort of non-stop action and ass-kicking that that movie delivered probably came away disappointed. But Unknown is a very tight Euro-thriller in its own right; it’s just a mystery with action rather than an action movie with a mystery. And when the action comes, it’s handled very well by director Jaume Collet-Serra; you can always tell exactly what’s going on and the sequences manage to be impressive while not being flashy or over-edited.
Neeson plays Dr. Martin Harris, an American biologist scheduled to give a lecture at a conference in Berlin. January Jones (X-Men: First Class) plays his wife, Liz, who accompanies him on the trip. As she’s checking in at their hotel, he realizes that he left his briefcase with all his lecture notes at the airport and hops in a cab to go back. The cab, driven by a Bosnian refugee and illegal immigrant named Gina (Diane Kruger), gets into a horrific accident and plunges into a river. Martin is knocked unconscious, but Gina pulls him out—then disappears. He awakes three days later in a hospital. He had no identification on him, so the doctors didn’t know who he was or who to contact. He’s also got partial amnesia, a convenient device for which a doctor handily explains, “There are no rules for severe trauma of this sort. Memories get lost or fractured. Most of them return, although it’s unlikely you’ll ever fully recall the events around your accident.” Luckily, Martin does recall Liz, and he immediately rushes to the hotel to see his wife, who he assumes will be freaking out not knowing where he’s been. When he finds her, however, she seems not to recognize him. Indeed, when he claims to be her husband, she introduces another man (Aidan Quinn) as her husband—the real Dr. Martin Harris. He’s even got a passport to back him up. What’s going on? 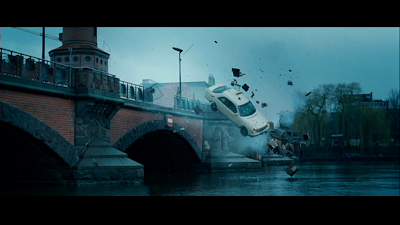 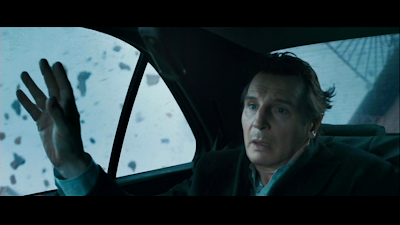 The premise (highly reminiscent of the 1969 Roger Moore movie The Man Who Haunted Himself, by the way) seemed preposterous enough that I figured there was no way the filmmakers could provide a satisfactory resolution to their intriguing mystery, but happily I was wrong. That they do ultimately pull that off (one that’s not merely satisfactory, in fact, but satisfying—and surprising!) is no small accomplishment. 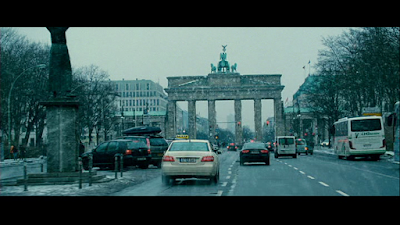 Unknown begins with an impressively fast set-up. Collet-Serra and screenwriters Oliver Butcher and Stephen Cornwell (who, interestingly, is the son of David Cornwell, better known as John Le Carré!) convey all of the necessary exposition very quickly, then launch right into the plot. (I haven’t read Didier Van Cauwelaert’s novel Out of My Head, so I have no idea how faithful the movie is to its source material.) Just a few minutes into the film, we’re already familiar with the primary characters, their situation and the setting. Despite the expediency of the set-up, Collet-Serra still has time for some great wintery Berlin scenery, which serves not only as pleasing eye candy, but also helps set the tone of the movie. All of this unfolds beneath some very stylish credits. The credits are representative, in fact, of the film to come. They aren’t especially showy David Fincher-type credits, and they don’t comprise a spectacular mini-film in their own right the way Bond titles do, but they’re classy and good looking. 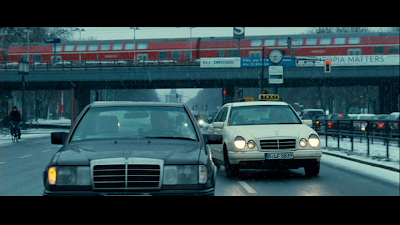 Even while taking the time to give us all the scenic shots I crave as Martin and Liz ride in a taxi from the airport to their hotel (as any good Eurospy movie should), Collet-Serra still manages to plunge fully into the plot by just seven minutes in when Martin is in his accident. The accident itself is well choreographed and well shot. Like the credits, the stunt isn’t too fancy; it happens simply and straightforwardly, and you can actually tell what’s going on, actually see the physics of it in action, something I vastly prefer to the post-Bourne quick-cut nonsense of Quantum of Solace, where brief shaky-cam glimpses of cars cut quickly together manage to convey that a crash has occurred, but don’t let us see how.

Martin’s predicament quickly worsens when he becomes aware (in the course of a very suspenseful scene in the hospital) that mysterious assassins are trying to kill him. The only one who might be able to help him is the taxi driver, Gina, but she’s disappeared. Luckily, Martin’s resourceful enough to track her down. Diane Kruger is at her most appealing as Gina, and in the tradition of the genre going back at least as far as The 39 Steps, Martin quickly gets her mixed up in his deadly situation even though she’s completely innocent, and inadvertantly brings death to her doorstep. Suddenly the two are thrust together on an adventure that takes them through rave clubs (the post-Alias equivalent of the old Eurospy nightclub scene, replete with house music, flashing colored lights and blue-haired, pierced beauties—an environment in which Liam Neeson seems very out of place!) and the snowy streets of Berlin in a breakneck car chase. It’s not Bullitt, but once again, you can follow the action, tell what’s going on. And the inevitable resulting crash even involves cable cars on tracks! (That’s exactly the sort of thing I want to see in any Europe-set spy movie worth its salt.) 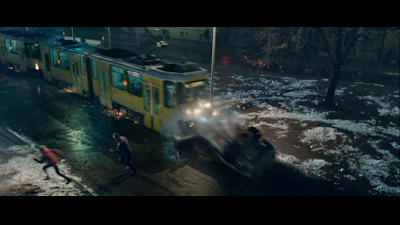 The chase might have made a bit more sense if Kruger were driving instead of Neeson, since she’s a local taxi driver who would both know the streets and presumably how to drive better than he does… but oh well. (She does get her own—admittedly less spectacular—car chase later.) The filmmakers were clearly thinking that Neeson needed an action scene at this point; he is, after all, the hero. Fans waiting for any Taken-style ass-kicking, however, will have to wait until the halfway mark for Neeson to finally fight someone—a spectacled assassin who’s been following him. It’s a good brawl, but since this character is a Hitchcockian Everyman caught up in a wild conspiracy instead of a trained operative like Bryan Mills, his style of fighting isn’t nearly so badass. 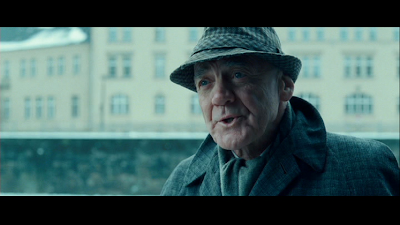 German actor Bruno Ganz steals the movie as an old Stassi agent with no regrets who now operates as a private detective. At the recommendation of a nurse, Martin turns to him for help. His character, Jürgen, could be right out of one of Stephen Cornwell’s dad’s books. In the movie’s best scene, a summit of sorts between two old Cold Warriors still dabbling in their trade, Jürgen is asked, “Why did you take his case?”
“Curiosity,” he replies.
“Is that all?”
“There’s not much in this world left to interest an old spy like me,” says Jürgen, invoking that favorite Le Carré theme of the old spy who can’t stop spying. 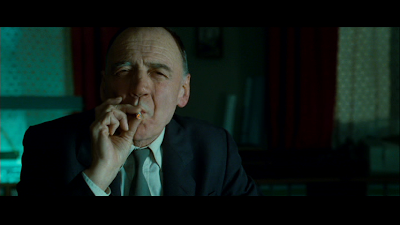 When Martin finally arrives at a solution to his the genuinely perplexing predicament (thanks to the aid of Jürgen and Gina), it actually surprised me. What surprised me more than the solution itself was the fact that it actually works—more or less. Sure there are a few loose ends that aren’t entirely explained, but overall, it works, and it’s not something that I’ve seen before exactly (though it’s a clever variation on an old plot spy fans have seen a lot).
Overall, spy fans will find a lot to please them in Unknown. It offers a great genre star in a great genre setting (one of the classic spy movie locations, too long unused!), cinematography that makes the most of both, cool chases and crashes involving cable cars, beautiful women, a top-notch supporting cast (which also includes cool turns by Frank Langella and The Lives of Others’ Sebastian Koch in small parts) and even some clever nods to genre antecedents as disparate as Le Carré, Ludlum and Mission: Impossible. (There’s an unexpected variation on Jim Phelps’ traditional briefing of his team toward the end.) Best of all, it offers all of these elements in a tight story that packs some genuine and satisfying twists. I could think of plenty of worse ways for a spy fan to pass a few hours. 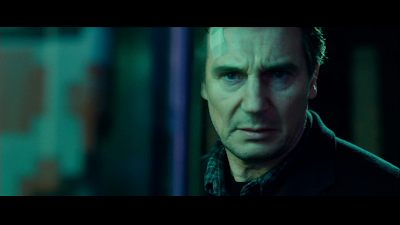 The presentation on Warner’s Blu-ray is unimpeachable, boasting a fantastic transfer that showcases that nice cinematography, low-key action and fantastic Berlin locations to their maximum advantage. The extras, however, leave a little to be desired. There are only two on the Blu-ray, and only one on the DVD—but DVD viewers aren’t really missing anything. There’s enough overlap in the things that these two very brief EPK pieces cover that you don’t even need to see them both. The BD exclusive, “Liam Neeson: Known Action Hero,” is basically a very short piece with people saying nice things about Liam Neeson… but I can’t begrudge it that, because who doesn’t like seeing nice things said about Liam Neeson? The most interesting anecdote comes from Neeson himself, who recounts a story about when he used to box and once got knocked out and came to briefly not remembering who or where he was. That (very short) run-in with amnesia made him feel like he had a handle on this character. 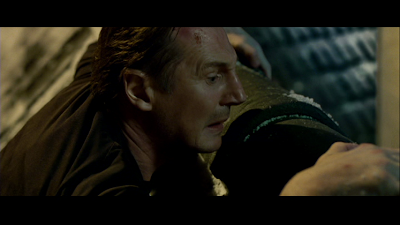 The unimaginatively titled “Unknown: What is Known?” is just as short, and even repeats some of the same beats on Neeson as the other featurette. Happily, it does contain some brief sound bites from just about everyone involved in the production: producer Joel Silver, director Collet-Serra and all the actors (even Germans Ganz and Koch)… but not the writers! I want to see the junior Cornwell! Oh well. (There was also too much January Jones and not enough Diane Kruger.) Neeson and Aiden Quinn repeat a bit from the other featurette about being old friends, and consequently enjoying their drag-out fight scene together. Silver points out that you shouldn’t see the twist coming, but when it does it will make sense, and I have to admit, he’s right. And that's the reason you should check out Unknown on disc, not because of these lackluster EPK featurettes!
Unknown, out June 21, is now available to own now on Blu-ray, DVD and Blu-ray/DVD Combo. Learn more about the release on Warner Bros.’ official website.
Posted by Tanner at 12:29 AM