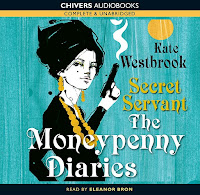 The Book Bond reports that Samantha Weinberg's trilogy of Moneypenny Diaries, my favorite James Bond continuation novels of the past decade, will see new life as audio books from Chivers. Normally I don't concern myself too much with audio books (how many different versions of the Fleming books have there been over the years?), but this announcement particularly excites me because I feel like The Moneypenny Diaries series has been unfairly marginalized. The three novels by Weinberg, writing under the pen name of Kate Westbrook, came out in 2005, 2006 and 2008. The concept of spin-off books told in a diary format and focusing on Moneypenny, a relatively minor character in Ian Fleming's stories, seemed off-putting to some Bond fans. Yet against all odds, Ms. Weinberg not only pulled off the questionable premise, but ended up penning three of the very best Bond continuation novels ever written.

Unfortunately, this series was the rare instance of the current incarnation of Ian Fleming Publications really dropping the ball publicity-wise. On top of a misleading cover that made it look like chick-lit, the first novel, Guardian Angel, was initially marketed with a ludicrous ploy that asked readers to believe that these books were non-fiction, a "true" account of James Bond's MI6 of the 1960s told from the point of view of a real-life figure. The half-baked scheme failed spectacularly, and most major media outlets ignored such an obvious hoax altogether and failed to review these truly excellent books. (The only blurb they ever got was "Thrilling!" from former Bond Girl Joanna Lumley, which was repeated on each cover.) Sales suffered as a result, and the second two books never even saw publication in America. IFP never did anything to correct their initial misstep, and instead moved onto other projects like Sebastian Faulks' risible Centenary novel Devil May Care, which sadly overshadowed the final Moneypenny Diary, Final Fling.

So I'm very happy to see any movement on The Moneypenny Diaries, and these new audio books indicate that publishers haven't abandoned them altogether, which is a very good sign. I sincerely hope that they find a new audience on this format, and that it leads to further exposure. I would absolutely love to see a bumper edition come out in the US collecting all three in one volume (along with the two never-collected short stories), like the two Raymond Benson omnibi released by Pegasus Books. (Pegasus is also putting out the individual John Gardner reprints this fall. Come on, Pegasus; take a look at Moneypenny!) Here's hoping. At any rate, if you're a Bond fan and you haven't yet checked out these books, make every effort to do so, in whatever format is most conveniently available to you. They're a far superior take on a Sixties-set companion to Fleming's Bond books to Devil May Care, and the qualify as genuine James Bond novels despite the different point of view.

The new audio books are read by actress Eleanor Bron, no doubt most familiar to Sixties spy fans from the Beatles' spy spoof Help! I'm sure Bron does a terrific job, though part of me can't help but think it was a missed opportunity not hiring Samantha Bond, the Pierce Brosnan-era Moneypenny. (Lois Maxwell obviously would have been the best choice, but sadly she passed away the same year that the first volume saw print.) All three titles are available for purchase from AudioGo at £22.50 a pop for the unabridged, 8-disc sets.