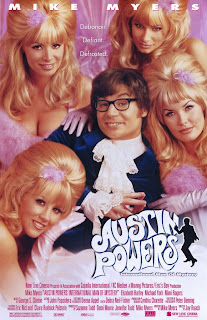 Every couple of years, the rumor mill spits out another Austin Powers sequel possibility. The latest one popped up yesterday, originating on the website Hitfix, which reported that Mike Myers had just closed a deal to resurrect the moribund shagadelic spy. The Hollywood Reporter then confirmed that Myers is "expected to close a deal" soon, adding that the actor would "write, produce and star in a fourth film," then hedging its bets by saying that "sources caution that no deal has closed." Deadline's Mike Fleming went even further with the denials,  stressing that "no deal has yet been signed, and top New Line brass are surprised the whole thing has reared up after they made Myers an offer six months to a year ago, and [heard] nothing." Fleming rehashes the potential story that popped up in 2007 and 2008 rumors about a movie focusing on Dr. Evil and his relationship with his son, Scott, but says that it's unclear whether that's still the concept if things move forward now. While Myers co-wrote the first three films with Mike McCullers, it's currently unclear (according to the trade blog) whether either he or director Jay Roach would be involved. Myers might work with a new collaborator. The whole thing even happening at all still depends on a deal being worked out between Myers and New Line, and apparently the two camps are far from in agreement on what that deal should be. So the upshot of all this? Maybe there will be another Austin Powers movie...
Posted by Tanner at 5:37 PM

Do we really need a 4th Austin Powers film?