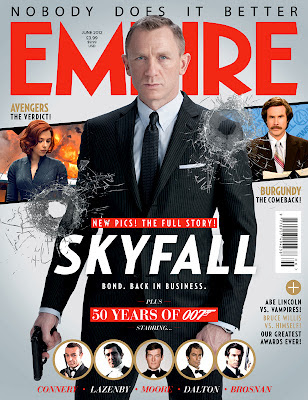 It's begun! Empire has bragging rights for the first Skyfall magazine cover in what's sure to be a 50th Anniversary-fueled onslaught of Bondian hype. And I'll end up buying every magazine to slap 007 on its cover, as I always do... starting with this one. Here's what they say about the James Bond content inside on the Empire website:


Inside we have the fruit of several visits to the set of Skyfall, wherein we try to peer behind the veil of secrecy that covers the production (well, it is about a spy after all) and bring you all the news we can extract from the cast and crew. We also celebrate Bond's 50th anniversary with a look at some key moments in Bond history: there's a look at GoldenEye, Live and Let Die and On Her Majesty's Secret Service, as well as a chat with Timothy Dalton. You might say we have a licence to thrill! If you were into tired puns, anyway.


Hear that? Dalton interview! Awesome. This issue hits UK newsstands on Thursday, and will no doubt wash up Stateside shortly thereafter. Keep your eyes peeled!
Posted by Tanner at 11:19 PM

It's a fine tribute to Bond's past and present, some fresh takes on the various eras with a few photos I've not seen before.

Skyfall sounds like it'll be a worthy entry to the series.

Dalton is on good form and it sounds like we were robbed of a great third Dalton outing.

It's also interesting to hear his take on the whole Licence Revoked/Licensc to Kill naming mess.

Cool! I can't wait to read that Dalton interview! I haven't made it to a newsstand yet, but I imagine they're available in America by now.