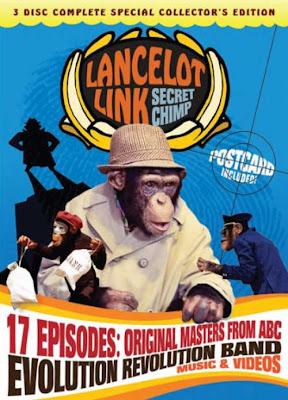 I was excited when a link for this first turned up on Amazon a few months ago, but then it disappeared. Now TV Shows On DVD reports that a Lancelot Link, Secret Chimp Complete Collector's Edition is due out May 29 from Film Chest! A previous release on Image was incomplete and basically bootleg quality, but even so those out of print discs command high prices on the resale market. Not anymore, thanks to this new release, since this one supersedes the old one in all respects. Film Chest's 3-disc Collector's Edition contains all of the Saturday morning ABC show's 17 episodes (each of which actually featured two separate 15-minute adventures) transferred from the original ABC vault masters (rather than dubbed from off-air VHS recordings), plus bonus content like the  music and videos of the all monkey band Evolution Revolution, whose segments were introduced on the original series by ape talk show host "Ed Simian."

Perhaps I should backtrack in case there's anyone here unfamiliar with Lancelot Link. As you'd probably deduce from that cover art, Lancelot Link was a chimpanzee secret agent. He worked for the secret organization APE (Agency to Prevent Evil) and tangled with the nefarious agents of CHUMP (Criminal Headquarters for Underworld Master Plan). All characters were played by trained primates and voiced by human comedians. Such a concoction could only have arisen from the spy-mad Sixties (indeed, Lancelot Link might be the ultimate product of the secret agent mania spawned by James Bond which trickled down to all facets of the media), but Lancelot Link, Secret Chimp didn't actually hit airwaves until 1970. (It ran until '72.) Your enjoyment of the series will no doubt be predicated upon your personal tolerance for languidly paced human-voiced monkey antics with jokes recycled from Get Smart, and you're probably better qualified to judge that for yourself than I can. But for a certain breed of spy fan, this release is sure to be most welcome! Retail is a modest $24.98, but of course it's bound to be less on Amazon.
Posted by Tanner at 12:02 AM