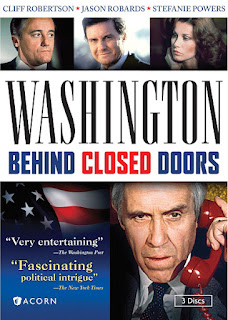 This is cool! On June 5, Acorn Media will release a 1977 spy miniseries that earned man from U.N.C.L.E. Robert Vaughn an Emmy that I'd never heard of before. Washington: Behind Closed Doors is based on the 1977 Roman à clef The Company by former Nixon aid and Watergate figure John Ehrlichman. The novel is Erlichman's fictionalized account of the events leading up to the Watergate scandal, and follows veteran CIA agent turned Director of Central Intelligence Bill Martin (loosely based on real-life DCI Richard Helms) as he attempts to keep secret a report exposing the Agency's past misdeeds. To do that, he crosses paths with figures based on Richard Nixon, Lyndon Johnson, J. Edgar Hoover, Henry Kissinger, Hubert Humphrey and Nixon aide H.R. Haldeman. As far as I can tell, the miniseries downplays some of the novel's Kennedy-era spy intrigue (revolving around an event based on the Bay of Pigs) in favor of the then white-hot-relevant Watergate stuff, but it still sounds fascinating! Cliff Robertson stars as Martin, Jason Robards plays the Nixon-like President Richard Monckton, and Vaughn plays the Haldeman figure. Andy Griffith co-stars along with spy vets Stefanie Powers (The Girl From U.N.C.L.E.) and Barry Nelson (the original James Bond in the '54 Casino Royale). Here's the studio's official description:


CIA director Bill Martin (Cliff Robertson) knows that an incoming president means a new direction for the country—and another set of eyes on the top secret Primula Report. Martin tries to build a rapport with his new boss, but President Richard Monckton (Jason Robards) is more interested in settling old scores and cleaning house with the help of the FBI. Against the backdrop of a war in Southeast Asia and antiwar protests at home, this high-intensity political drama tells the story of an increasingly paranoid president, an administration under siege, and a reckless group of White House aides desperate to hold on to power.

This sounds great! I can't wait to see it. The 3-disc, 6-episode set will retail for $59.99 (though it will no doubt be less on Amazon), and includes an 8-page bonus booklet "with articles on the historical background of the program, the Vietnam War, peace movements in America, Nixon’s visit to China, and the Watergate scandal; plus brief biographies of the political figures of the period." Due to music rights issues, alterations have been made to the original soundtrack. Oh well. That's a small price to pay to have this well-regarded all-star miniseries on home video for the first time in any format!
Posted by Tanner at 4:20 PM

Hi, Nice post. Would you please consider adding a link to my website on your page. Please email me.