Expanded Dr. No 50th Anniversary Soundtrack on the Way 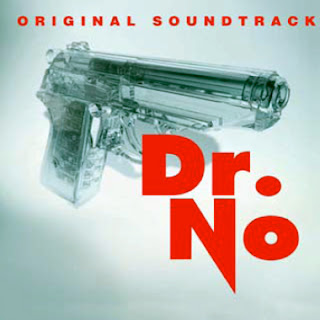 The excellent spy music site Spy Bop Royale provides the heads-up that there's an unexpected treat coming this fall for fans of James Bond music! The Harkit label (who have put out such spy essentials as Modesty Blaise and Fathom) will release a special 50th Anniversary Edition of the soundtrack to Dr. No in October. According to the intriguing copy in their newsletter (reprinted verbatim), "we have assembled what we believe is the DEFINITIVE edition of the music from the soundtrack of this genre-changing movie with many previously unreleased cues. Long a contentious issue of who actually wrote and/or scored the movie (John [Barry] finally revealed on British radio that it was he who wrote the famous guitar-led theme.) This album seeks to put many myths to bed. With a brand new essay by noted and respected film music writer, Randall Larson, we hope you will enjoy this outstanding release." Sounds wonderful! And potentially controversial! But is it authorized by Danjaq? There is no official Bond logo anywhere on the cover (which looks a bit more Tomorrow Never Dies than Dr. No), adding to the mystery. But the CD is real. The catalog number is HRKCD 8395.
Posted by Tanner at 3:52 AM

According to a Wikipedia page about Monty Norman, "Norman is famous for writing the music to the first James Bond movie Dr. No, and writing "The James Bond Theme", the signature theme of the James Bond franchise. Norman has received royalties since 1962 for the theme, but it was arranged by John Barry after the producers were dissatisfied with Norman's arrangement. Barry claimed that he actually did write the theme; nevertheless, Norman won two libel actions against publishers for claiming that Barry was the composer, most recently against The Sunday Times in 2001."

The consensus on this is that it's the music & effects track from the Criterion Dr.No laserdisc. I'm hoping it's the real thing and am willing to roll the dice on it.