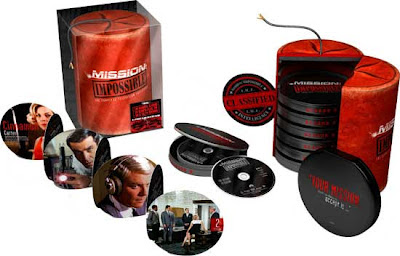 Forget about that "complete series" bundle on Amazon that just amounts to the individual seasons shrinkwrapped together. TV Shows On DVD reports that Paramount is plotting the ultimate Christmas gift for spy fans this season with the lavishly packaged Mission: Impossible - The Complete Television Collection Giftset

. Normally I'm opposed to bulky novelty packaging, but even I have to admit... this dynamite container, evoking the show's iconic lit fuse opening, looks incredible! Incredible enough to re-buy all those seasons I already have, though? Probably not. Unless, of course, there's actual bonus content, like that Diagnosis Murder episode, "Discards," with Barbara Bain reprising her Cinnamon Carter role. The website reports that this is a 56-disc set, and I count 55 amongst all the seasons I've got. So it does sound like there's a bonus disc... meaning serious Phelps fans may indeed be forced to buy again. If you don't already have all these seasons, however, then this is a no-brainer: it should be the number one item on every spy fan's Christmas list this year! Besides that mysterious extra disc, it already includes not only all seven seasons of the original Sixties and Seventies classic, but also both revival seasons from the late Eighties! [UPDATE:] No price has been announced yet, but Even at the ridiculously steep SRP of $379.99 (discounted to $265.99 on Amazon), I'm still going to say it's worth it if you don't already own this series. Mission: Impossible is one of the best spy shows of all time, with probably the second most instantly recognizable spy music of all time to boot. It's certainly my favorite American spy series of its era. But I'm not going to get into all that here. Instead, why don't you check out my extensive reviews of the individual seasons below?

UPDATE: In a subsequent post, TV Shows On DVD has confirmed that there is indeed a bonus disc. Curses! My wallet is recoiling. The contents remain somewhat mysterious. All they report so far is "special bonus features such as brand-new featurettes, episodic promos, a photo montage with a vocal version of the Mission: Impossible Theme (performed by The Kane Triplets), 'and more!'" A lot is going to depend on that "and more" and the nature of the featurettes. If they actually got the surviving cast members to do new interviews, or included some of those reunions they did on various TV shows over the years (or the M:I segment of last year's PBS documentary about crime dramas), or, of course, the Diagnosis Murder episode, then it could yet prove well worthwhile. But episodic promos (much as I enjoy them) alone are not enough to whet my appetite, to say nothing of a photo montage with a vocal version of the theme...

And I miss Peter Graves. I sure wish he were still around to participate in these featurettes.