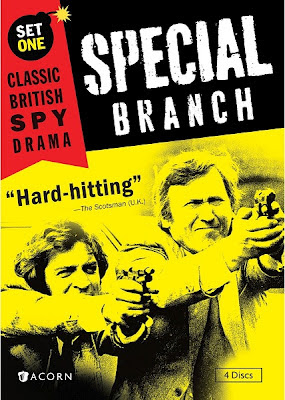 Acorn will release Special Branch: Set 1 on September 25, marking the Region 1 DVD debut of the gritty Thames Television police/spy series that ran from 1969-74. It's called Set 1, but rather confusingly, Acorn are following the same strategy they did with Callan: they're beginning with the first color season from the Seventies, which is actually the show's third season. However, that decision works a little better for Special Branch than it did for Callan because whereas that show plunged viewers confusingly into the middle of an ongoing, serial plotline, Special Branch was completely rebooted when it switched to color. Even the stars are different. Derren Nesbitt lead the cast of the black and white series; the color episodes star George Sewell and Callan's Patrick Mower. I actually prefer the monochrome episodes (though they have a rap for being "slow" compared with the more action-packed color seasons), but hopefully Acorn will get around to releasing them eventually. Despite the very conspicuous "Classic British SPY Drama" tag on the packaging (which I certainly think looks cool), I'd say that Special Branch leans more toward a cop show overall. (The first episode won't give you any hint of espionage.) But there are plenty of spy-oriented episodes down the line, and Callan fans will be attracted to the similar gritty tone, as well as the presence of Mower.
Posted by Tanner at 7:36 PM

Special Branch does belong to that same school of "gritty realism" as Callan. Not quite as interesting though imo.

Sewell and Mower Special Branch was essentially a dress rehearsal for Euston's later and more successful effort, The Sweeney. Still, lots to enjoy, but I think I prefer Nesbitt's version too, despite Sewell being a very convincing copper

I agree, dfordoom, it's certainly not as interesting as Callan. Few shows are! But it still might be appealing to fans of Callan. It was because of Callan that I first sought out Special Branch.

Glad to hear you agree with me about the monochrome seasons, Mark! The general impression I get is that a lot of fans seem to find those ones too "slow." Not only do they seem to have more espionage, but I found them really interesting! It's true that the color ones do play like a dry run for The Sweeney to some degree, and I hear that a lot, but I don't think that's an entirely fair rap for them. Special Branch is its own animal, and it's certainly got more of a spy element than The Sweeney!