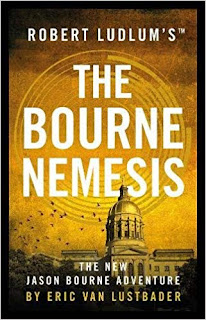 Bestselling author Eric Van Lustbader announced today in an exclusive interview with The Real Book Spy that he is stepping down as the official author of the Jason Bourne continuation novels. Lustbader was hired by Robert Ludlum's estate in the early 2000s to continue the adventures of Ludlum's famous amnesiac assassin character following the success of the Matt Damon movies, despite Ludlum's own Bourne trilogy having reached a pretty definitive conclusion. From 2004 to 2016, Lustbader wrote ten Jason Bourne novels, far outpacing the character's creator. Furthermore, the author's previously announced eleventh Bourne novel, The Bourne Nemesis, will likely never see completion.

Lustbader has maintained a grueling schedule over this past decade, most years producing both a Bourne continuation novel and an original novel featuring his own characters. He's not the first continuation author to become fatigued. John Gardner also grew weary balancing a James Bond novel every year during the 1980s and early '90s with his own (considerably lengthier) spy fiction (the excellent Herbie Kruger novels and the Secret Generations epic). Writing schedules like that can't be easy!

This likely isn't the last of Jason Bourne on the printed page. The Ian Fleming estate (operating first as Glidrose Publications, and later Ian Fleming Publications) commissioned Raymond Benson to continue the Bond series, and later settled on a strategy of appointing different authors for different books, with Anthony Horowitz recently becoming the first writer since Benson to pen more than one novel in the main series. The Ludlum Estate has followed a similar strategy with other series created by the late novelist. Numerous writers have tried their hands at Covert-One novels (a series which was handed off to other writers even in Ludlum's lifetime, and indeed created with that strategy in mind), and at least two writers have continued the adventures of Paul Janson, hero of one of Ludlum's final novels, The Janson Directive (review here). I strongly suspect we'll see another new Bourne novel sooner or later with a new name on the cover.

Meanwhile, head over to The Real Book Spy to read the entire, in-depth interview with Lustbader including his future plans.
Posted by Tanner at 11:36 PM

Do you know if there will be any more Covert-One books?