Mezco Made a Diabolik Action Figure... and You Can Pre-Order it Now! 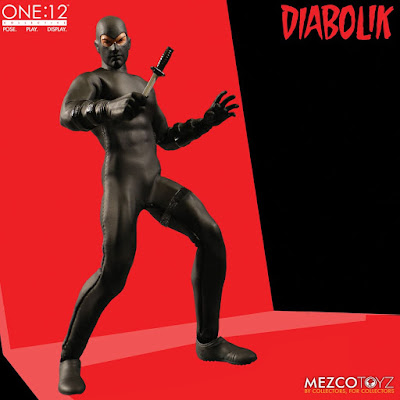 Toy company Mezco has been displaying a prototype for a Diabolik action figure since at least summer of 2017, and I was beginning to wonder if it would ever actually happen. Then, last week, they did a blog post offering a good precis on the character's history, and also reassurance that Diabolik was still on their mind. And yesterday, the figure became available for pre-order on the Mezco website! (Be warned though... it isn't cheap. You may want to polish off your own suction cup climbers and stake out Mezco's warehouse!) 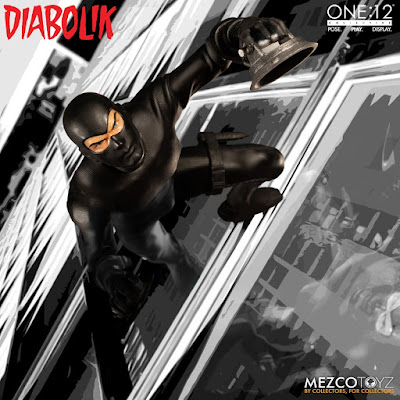 Shipping in summer 2019, the figure is part of Mezco's high-end One:12 Collective figures. Those figures are known for their realistic clothing and ultra posability. The figure runs about 16cm tall (a little over 6 inches), and features over 30 points of articulation. It comes with two interchangeable heads (one masked, the other not), and eight interchangeable hands to create various poses or grip accessories like throwing knives or loot. 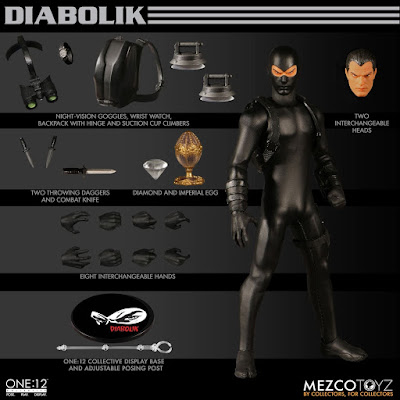 Mezco's Diabolik figure is based on the Italian comic book (fumetti neri) character created by the Giussani sisters, and not specifically on Mario Bava's sublime 1968 film version thereof (one of the all-time classic Eurospy titles), so the maskless likeness sadly doesn't resemble John Phillip Law. But the film costume was so true to the comic (as was its logo) that with the mask on you can easily pretend your figure is Law's Diabolik! And it's a damn cool figure either way. Diabolik may be a master thief and not a spy, but the Jaguar-driving supercriminal embodies so many tropes of the Sixties spy fantasy! (As does the movie.) Let's hope this toy sells well and Mezco follows it up with a matching Eva Kant figure!

Check out the figure in detail and put in a pre-order (requiring a $20 deposit) on Mezco's site.

To get an idea of how the prototype developed over the past fewyears, check out toy news sites like Super Punch or Action Figure Fury, both of whom posted good images from various conventions.

Read my review of Bava's Danger: Diabolik (one of my all-time favorite movies) here.
Posted by Tanner at 12:20 AM