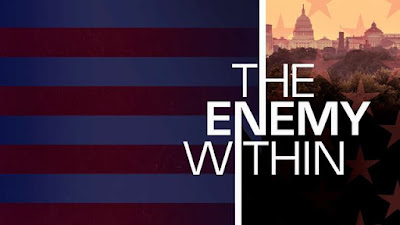 Interagency espionage rivalries are all the rage on network television these days. We're getting closer to the premiere of Whiskey Cavalier, the show I've been most looking forward to this season, which takes a romantic, comedic look at the relationship between CIA and FBI agents. Hulu (which, I know, isn't network), of course, had The Looming Tower this year (currently racking up awards nominations and mentions on critics' year end lists), a very serious exploration of the disconnect between America's various intelligence agencies leading up to the massive intelligence failure of 9/11. Now NBC is gearing up to use the FBI/CIA rivalry as a backdrop for what Deadline describes as "a fast-paced thriller set in the world of counterintelligence," The Enemy Within.

The Enemy Within boasts an impressive spy pedigree. Covert Affairs creators Matt Corman and Chris Ord produce (along with Gotham's Ken Woodruf), and the cast includes Morris Chestnut (Legends), Kelli Garner (Pan-Am), Raza Jaffrey (Spooks/MI-5), and Coral Peña (24: Legacy), along with Jennifer Carpenter (who apparently voiced Black Widow in some animated Marvel short, so that counts as some spy cred, right?) Here's how NBC describes the series, which is expected to premiere mid-season:


In this fast-paced, spy-hunting thriller, Erica Shepherd (Jennifer Carpenter) is a brilliant former CIA operative now known as the most notorious traitor in American history serving life in a Supermax prison. Against every fiber of his being but with nowhere else to turn, FBI Agent Will Keaton (Morris Chestnut) enlists Shepherd to help track down a fiercely dangerous and elusive criminal she knows all too well. For Keaton, it's not easy to trust the woman who cost him so much. While Shepherd and Keaton have different motivations for bringing the enemy to justice, they both know that to catch a spy... they must think like one.