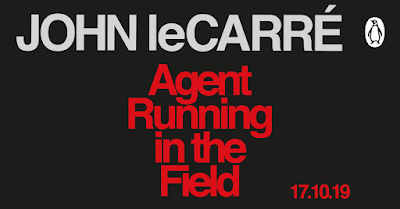 John le Carré announced a new novel today, coming in 2019! He may be in the second half of his Eighties now, but, happily, the undisputed master of the spy genre keeps going strong. While either a personal memoir (2016's The Pigeon Tunnel) or a novel revisiting his most famous character, George Smiley, one last(?) time (2017's A Legacy of Spies) both seemed like they might be fitting moments to retire, le Carré clearly still has more to say. Agent Running in the Field will be released by Penguin/Viking on October 17, 2019 in the UK, and October 22, 2019 in the U.S. UK bookseller Waterstones and Amazon UK already has it available to pre-order. Here's the publisher's blurb on the new thriller:


Set in London in 2018, Agent Running in the Field follows a twenty-six year old solitary figure who, in a desperate attempt to resist the political turbulence swirling around him, makes connections that will take him down a very dangerous path. In his plot and characterisation le Carré is as thrilling as ever and in the way he writes about our times he proves himself, once again, to be the greatest chronicler of our age.

Agent Running in the Field will be the author's 25th novel. His first, Call for the Dead (review here) was published in 1961. Le Carré's work continues to be popular in other mediums as well. There have been recent feature film adaptations of Tinker Tailor Soldier Spy, A Most Wanted Man, and Our Kind of Traitor, and television miniseries versions of The Night Manager and, most recently, The Little Drummer Girl, based on his 1983 novel. Park Chan-Wook's visually stunning six-part adaptation recently aired on AMC in America and the BBC in Britain.
Posted by Tanner at 2:31 PM