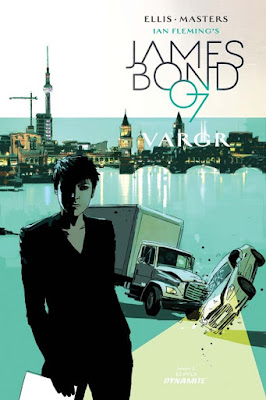 The latest issue of Diamond Previews (the print version only, unfortunately) offers comic book readers a first glimpse at the second issue of Dynamite Entertainment's James Bond 007, including four variant covers. According to the solicitation copy, "James Bond is in Berlin, alone, unarmed and with no idea of the forces ranged in secret against him. If he can make it to the Embassy, he might survive for a few hours more. But he’s getting into that car with that woman, which means he has only minutes to live…" 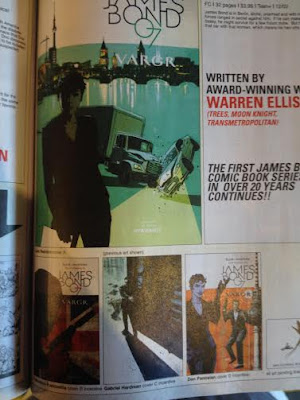 Is "that car" an Aston Martin? Cover A, by Dom Reardon (high-res version courtesy of Bleeding Cool), certainly shows one. This is a little surprising because all the publicity surrounding this comic book, by writer Warren Ellis (RED, Global Frequency) and artist Jason Masters, plays up how it's based on the literary James Bond of the Ian Fleming novels, and not the movie Bond. Yet Fleming's Bond only ever drove an Aston Martin once, in Goldfinger. It's clearly a modern model depicted on the cover, similar to the DBS V12 Daniel Craig drove in Quantum of Solace. While a Bentley might have been a more expected choice of vehicle for the Bond of the books, there is certainly precedent for 007 to drive an Aston Martin in comics. In the never completed 1993 Dark Horse Bond comic "A Silent Armageddon" by Simon Jowett and John Burns, 007 drove a dark green V8 Vantage similar to the one Timothy Dalton drove in The Living Daylights. (I sure would like to see Dynamite print the supposedly finished but never published final two issues of that series!) Of course the car in the description is not Bond's car anyway, but one driven by a mysterious woman—presumably the Selina Kyle-looking Bond girl making her public debut on these covers. So perhaps she drives an Aston as a cute nod to the films. Or perhaps the car on the cover isn't even featured inside the comic, and is just the artist's touch! We'll find out December 2 when part 2 of Ellis's inaugural storyline "VARGR" hits shelves.
Posted by Tanner at 2:13 AM