Londoners: Watch The Avengers on the Big Screen With Diana Rigg in Person 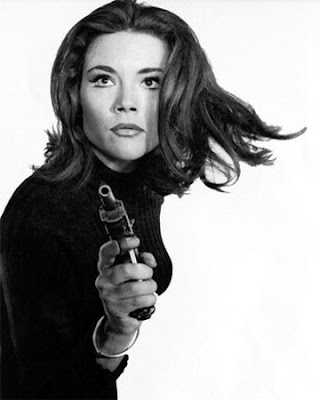 Lucky Londoners will be able to enjoy the event of a lifetime next month when Dame Diana Rigg herself does an on-stage Q&A following a screening of the classic Avengers episode "The House That Jack Built." It's one of a pair of absolute classic Emma Peel episodes screening on October 25 at BFI Southbank. You'd be hard pressed to come up with a better Emma double feature, in fact, than the monochrome "House That Jack Built" and the color "Return of the Cybernauts," which guest starred the great Peter Cushing. "Cybernauts" will be accompanied by "a compilation of oddities and rarities from the world of Emma Peel and The Avengers." Avengers fans will be aware that Dame Diana rarely speaks about her seminal work on the classic Sixties spy series, and even more rarely participates in any events pertaining to it. So this is a truly unmissable opportunity... and I've never been so jealous of my London friends! Even if you've never seen the show (though I can't imagine why not!), do yourself a favor and get tickets for this event. The greatest female spy star ever live on stage, and a screening of two of the greatest episodes of the greatest spy series of all time? How can you pass it up? Well, unfortunately I'll have to, as I don't have the means to get to London just now. But for those who do, tickets go on sale on October 6 at 11:30am for £16. What better way to celebrate the lives of the two luminaries of that series we've lost this year, Brian Clemens and Patrick Macnee?
Posted by Tanner at 5:01 AM

It was a fantastic day!

Little round-up of the day's events in English here and in French here.

Thank you! It sounds every bit as wonderful as I imagined. And your artwork is fantastic!