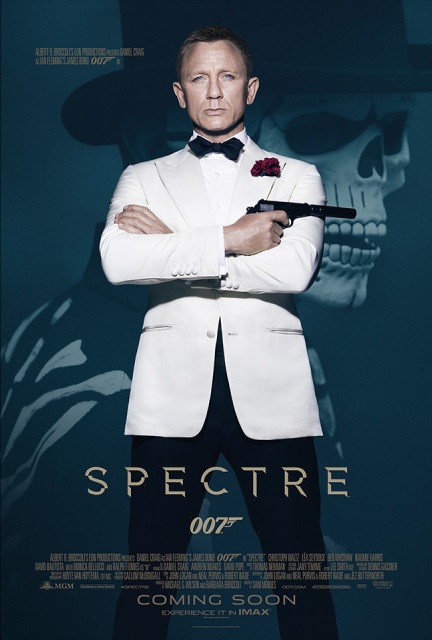 A brand new SPECTRE poster was unveiled today on 007.com. The site does not indicate that it's a final 1-sheet, so I think we can assume it's another Advance. I'm definitely a fan. As I said when the last trailer was released, I love seeing Daniel Craig in a white dinner jacket, evoking the likes of Goldfinger and Octopussy. Since Craig took over (and as signaled by the Casino Royale 1-sheet featuring the superspy with his tie undone, gun at his side), the marketing of the films has seemed determined to avoid the classic Bondian poses of the past such as Brosnan, Moore and Connery used to strike, with Walther across their chest or held pointing upwards, next to their face. SPECTRE has been toying with classic imagery (the previous teaser poster evoked Moore's Live and Let Die publicity shot, with black turtleneck and brown leather holster), and this is the closest we've gotten yet from a Craig poster. Part of me wishes they'd go all the way, and let him hold his gun pointing up, in the more, ah, virile pose of the past... and ideally flank him with beautiful Bond women. (At least one!) But perhaps that's exactly what they're building towards for the final 1-sheet! It's also interesting to note that this campaign continues to recall Live and Let Die specifically, which Craig and director Sam Mendes have both cited at times as their favorite Bond movie. (I believe Craig has also said it was his first.) The skeleton figure in the background, though donning a Mexican Day of the Dead mask rather than a Caribbean voodoo one, certainly stirs memories of the late, great Geoffrey Holder as iconic henchman Baron Samedi. Will SPECTRE itself have any Live and Let Die connections? The campaign has also so far summoned the spirits of On Her Majesty's Secret Service (with its initial bullet-shattered glass imagery) and, of course, Goldfinger, with this white dinner jacket and red carnation. (It's a big year for Goldfinger and classic Bond homages on posters. Spy also relied on one for a character poster showcasing Melissa McCarthy, while referencing Skyfall and the last SPECTRE advance in others, while American Ultra paid tribute to Octopussy.)

UPDATE: I hadn't even looked at the credits block at first, but Facebook users have pointed out one particularly notable credit: Daniel Craig now has what Sean Connery always wanted and Cubby and Harry refused to give him, a co-producer credit. Also interesting is that unlike the writers who performed polishes on the last couple of movies, Jez Butterworth ends up with a script credit in addition to John Logan and Bond perennials Neal Purvis and Robert Wade. Interesting!