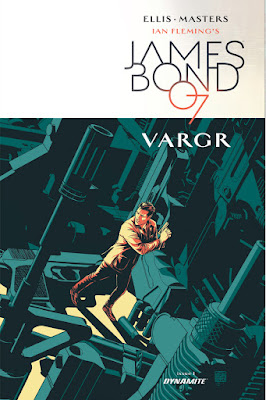 Anthony Horowitz is a brilliant writer, but proved himself a less brilliant interviewee a few weeks ago when he put his foot in his mouth promoting his new James Bond novel Trigger Mortis and the Internet didn't like it. He also made some odd statements about how he viewed the character of Bond, but fortunately his novel doesn't bear them out. Warren Ellis, on the other hand, whose new 007 comic book debuts November 4, speaks quite eloquently about Bond in every interview I've read so far. Read this latest, with Bleeding Cool, for example. He even navigates the tricky waters of what Sarah Palin would call "gotcha questions," like "Seen through a contemporary lens, Bond comes across as misogynistic at times; how do you deal with that misogyny in a modern series?" Other Bond writers have stumbled over such questions in the past, but Ellis handles it as well as any I've seen, saying:


A lot of this, of course, is about postwar British mores: many of them were still around when I was growing up in the Seventies. The attitude to people of colour, the notion that lesbians really just needed a good seeing-to to fix them… all depressingly familiar. Contemporising Bond, for me, requires the writer to move that baseline — on a simple level, it was possible for the Bond of Casino Royale to have grown up with those views inculcated into him, because Bond was conceived of as an “ordinary” man, but the Bond of VARGR [the title of Ellis' first story arc] could not have grown up like that.

All that said: yes, I believe there to be a streak of misogyny in Bond, but I think a contemporary reading exposes much (but not all) of that as misanthropy. I suspect Bill Tanner is Bond’s one single friend.

I think that's a very interesting response! Be sure to read the entire interview.