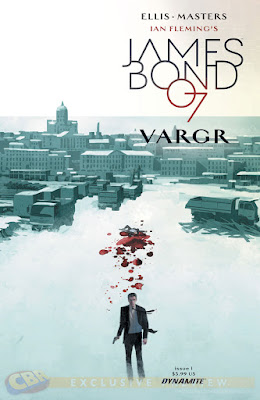 New James Bond continuation author Anthony Horowitz's ideas about James Bond's character have been getting a lot of play on the Internet lately for all the wrong reasons, but another new Bond writer has also shared his ideas about who 007 is this week in a couple of interviews. It was announced in July that Warren Ellis would be the first writer on Dynamite's flagship James Bond comic book series, and that was fantastic news. I was hoping (and guessing) the company would spring for a big name on at least the first arc, and Ellis is among the biggest. He's also, happily, a terrific writer, and no stranger to spies having written RED (which formed the basis for the Bruce Willis movies), Reload (with former Bond comic illustrator Paul Gulacy), and his magnum opus Planetary, which featured a Bond/Nick Fury analogue. Speaking with Sarah and Dan's Extra Edition on BBC radio on August 4, Ellis revealed that although his Bond is very much Ian Fleming's literary character, and not the movie Bond, he couldn't resist one homage to the movies - a thrilling, pre-credits sequence-style "cold open." ("It's a duel in a building site outside Helsinki in Finland"). He also gave a description of his first arc, entitled VARGR. 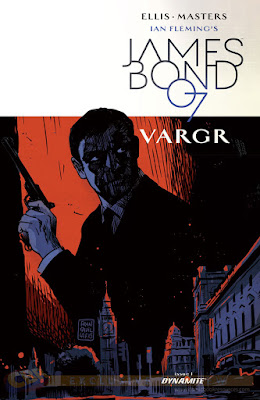 "006 has died," Ellis explained. "And 007 is given his workload to carry on with until 006 can be replaced. And this fine thing going into a situation without the correct preparation. And what he thought was a very simple counterespionage gig involving the drugs trade turns out to be something far, far larger and a direct attack on the British Isles. It's set, as I say, in Finland; it's set in Berlin in the winter, and it's set on a tiny island off the Norwegian coast." He also revealed that the villain of the piece, a Serbian, would be named Slavan Kurjak. 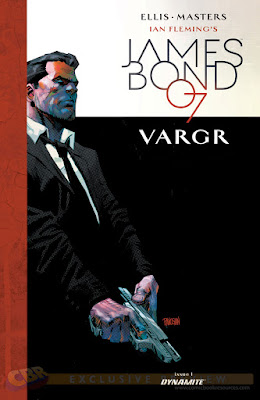 In a more in-depth interview this week with Dynamic Forces, Ellis shared even more. He confirmed that he will be staying with the title for at least one more arc beyond the first six issues, and revealed some of the supporting characters from Fleming's novels who will turn up in VARGR. "You can’t do Bond without M, Moneypenny and Bill Tanner. And Major Boothroyd. I haven’t decided on the second volume yet, but I’d like to work the Felix Leiter of the novels in there." He also explained the somewhat mystifying title (which I had thought was an acronym), saying, "VARGR is an Old Norse word meaning variously wolf, evildoer or destroyer." Proving his cred for writing 007, Ellis shared his own five favorite Fleming novels (all excellent choices, if you ask me!), concluding that "You Only Live Twice is possibly my favorite because it shows Bond at his most lost and broken," which may offer a good indication of the sort of 007 we can expect to see in his comic. Perhaps most interestingly of all, he offers his take on Bond's character, and, proving that there are many valid interpretations of a given text, it's in some ways at odds with Horowitz's analysis. Read the entire interview for all the juicy details and more hints of what we can expect this fall from Ellis and artist Jason Masters. 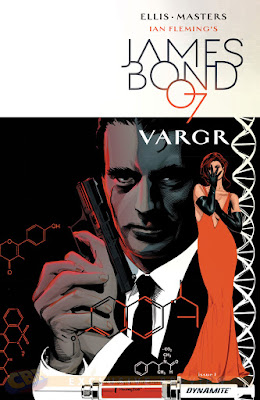 When it was first announced last year that Dynamite would publish new James Bond comics, it seemed inevitable that we could expect multiple variant covers. (The company loves them.) Now, with the comic due out November 4 (just as SPECTRE hits theaters), we've got our first glimpse of them! Comic Book Resources debuted a handful of variants and retailer incentives that will drive 007 completists crazy tracking them all down this fall, some of which illustrate this story. See the others at CBR. I have to say, I love the title treatment! Maybe not quite as much as I loved Dark Horse's Bond comics title treatment in the 90s, but this one is very contemporary and very striking.

All in all, I can't quite pinpoint whether I'm more excited about Horowitz's 1950s-set novel Trigger Mortis, or Ellis's present-day continuation comic VARGR! It's going to be a great fall for Bond fans. 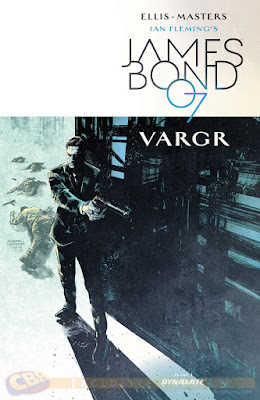 Besides the contemporary flagship series, Dynamite also plans a period "Year One"-type 007 origin story by a different, yet to be announced writer set in Fleming's original timeline (placing it either in the Forties or Fifties), and a series of graphic novel adaptations of Fleming's novels. Their deal with Ian Fleming Publications lasts ten years, so we can look forward to a lot of Bond comics in the coming decade - hopefully enough to make up for the past two decades in which Agent 007 has been completely absent from comics shelves! (Excepting a one-off graphic novel adaptation of the first Young Bond adventure, Silverfin.)
Thanks to Jack and Maurice!
Posted by Tanner at 4:27 AM