SPECTRE Soundtrack Features Instrumental Version of Writing's On the Wall 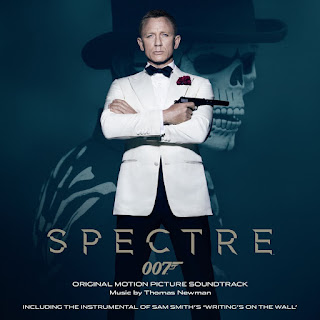 For decades the theme song was the centerpiece of a new James Bond soundtrack album. Then when Daniel Craig took over the role, that tradition ended. Chris Cornell's powerful theme song "You Know My Name" (still the best of the Craig era) was not included on the Casino Royale soundtrack album despite its melody forming the backbone of David Arnold's score. (The Sony Classical soundtrack album even bore the warning, "This album does not contain a Chris Cornell recording.") Jack White and Alicia Keys' "Another Way to Die" did appear on the Quantum of Solace album, but at the end instead of the beginning. (Although that melody, which Arnold had nothing to do with, didn't recur throughout his score.) The album was released on Keys' label, the Sony-owned J Records. And then Adele's superb, Oscar-winning "Skyfall" theme was left off of Thomas Newman's score album for that film. (Again on Sony Classical, and again with a dire warning about the lack of a recording "by the artist Adele.") With the SPECTRE soundtrack, we'll get something altogether different. The album, on the Decca label, will include Sam Smith's main theme "Writing's On the Wall..." but in an instrumental version. Decca is a subsidiary of Universal Music Group, as is Smith's label, Capitol. Instrumental versions of both "Skyfall" and "Another Way to Die" were released, but as B-sides on the singles, not on the score albums. It will be interesting to see if the inclusion of the instrumental on the Newman album is an indication that Newman will work it into his score. At any rate, a lot of Bond fans will probably find the omission of the vocals makes for a more satisfying listening experience, as the primary complaint about the song has been with Smith's falsetto-heavy vocals and not the rather traditional Bondian orchestration. SPECTRE: The Original Motion Picture Soundtrack by Thomas Newman, including the instrumental of Sam Smith's "Writing's On the Wall," is due out physically on November 13, a week after the film's U.S. release. A digital release, still unannounced, is expected a week or two earlier. The CD can be pre-ordered on Amazon.
Posted by Tanner at 11:15 PM

Might you have any intel on a vinyl LP release? SKYFALL received a vinyl release.

No Smith. Count your blessings.