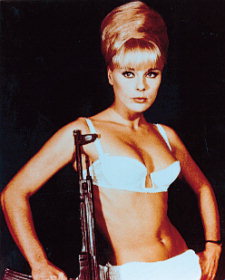 Goddess. Spy goddess! Elke is the ultimate Bond girl who never was a Bond girl, for some reason. (Maybe Pink Panther girls couldn’t be Bond girls?) She epitomizes Sixties glamor and sex appeal. She turned up in quite a few non-Bond Sixties spy movies, and therefore I’ve chosen her to represent those movies on this list. Elke was in both Hollywood spy flicks (the final Matt Helm movie, The Wrecking Crew and the Paul Newman North By Northwest ripoff The Prize, among others) and European ones, like Deadlier Than the Male. Deadlier Than The Male is the very best of all the Sixties Bond knock-offs, and the best of the genre known as "Eurospy."

This term refers to the glut of 007esqe flicks shot quickly and on the cheap on the continent, mostly Italy or Spain. They tended to feature heroes with names like "James Tont," numbers like "077" and enemies like "Goldginger." (In fact, many of them had the word "gold" somewhere in their title, usually as part of a compound word that made no sense.) Even though they are knock-offs, they should not be dismissed by spy fans. Many of these movies are immense fun. And while they’re hard to find, they’re also enjoying a bit of a resurgence amongst a discriminating fanbase.

First, there’s the excellent Eurospy Guide, a book that belongs on every spy fan’s shelf. Even if you’ve never seen or never intend on watching a Eurospy movie, you’ll enjoy learning about them and reading descriptions of some of the outlandish plots. It’s an excellent primer if you’re just getting into the genre, and a fabulous guide of where to go if you’ve seen some of the more famous ones and want to dig a little deeper. No one could hope to ever become as well-versed as authors Matt Blake and David Deal, so I’m very grateful to them for sharing their knowledge. In some cases, they’ve sat through these movies so you don’t have to. Read a negative review and don’t waste your time tracking down that elusive title. But read a positive one, and it can be very frustrating trying to find a copy to watch! Most of these Eurospy movies are long out of print, many never released at all on video or DVD in the United States. Fortunately, that brings us to the second part of the current Eurospy Renaissance: Dorado Films.

Dorado Films International, a small boutique DVD distributor, seems to have specialized in spaghetti westerns until quite recently. Now, they’re branching out into the Eurospy genre and releasing some much sought-after titles. They’ve put out a few of the Ken Clark "077" movies, including the stellar Special Mission Lady Chaplin starring Bond girl Daniella Bianchi. If the trailers included on that disc are anything to go by, they’ve got a slew more Eurospy titles up their sleeve, including some I can’t wait to see on DVD like Danger Route and Assignment K.

So, back to Deadlier Than the Male. It barely qualifies as a Eurospy movie, really, since it’s an English film, but the Euro stars (Elke and the luscious Sylva Koscina) and locations qualified it for the Guide, so that’s good enough for me. It’s got a budget far higher than most of the Euro fare, but equally lower than the actual Bonds. It’s a great stepping stone between 007 and 077! And, best of all, it’s available on DVD in the USA, courtesy of a company called Hen’s Tooth. (Although the British disc offers some nice special features and comes bundled with the sequel.)
The male star is one-time Bond contender Richard Johnson (of The Haunting and Fulci’s Zombie 2), who does a nice job. But the real stars are Elke and Sylva. Case in point: the sequel, Some Girls Do, while mildly enjoyable, doesn’t come close to living up to DTM. And you need look no further than the posters to see who sold the tickets; it’s the two ladies, in bikinis and wielding spearguns. 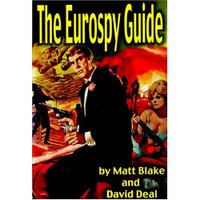 I should probably mention that Deadlier Than the Male is technically a Bulldog Drummond movie. But it doesn’t bear much resemblance to Sapper’s pre-war potboilers. This is Drummond reinvented as a suave Sixties Bond clone, which is a bit ironic since it could be argued that Bond himself was in part inspired by the original Drummond... Anyway, it’s a movie well worth checking out and it stars Elke Sommer at her absolute sexiest. (And, yes... deadliest!) And in addition to having a great Bond Girl Who Wasn’t, it’s also got a great Bond Theme Song That Wasn’t, the title track performed by the Walker Brothers. It’s as good as any Bond song, and that’s saying a lot in my book! (Scott Walker eventually did record an actual Bond song, for the end credits of The World Is Not Enough. It’s nothing like Deadlier Than the Male, but a great track nonetheless that was sadly left out of the movie at the last minute. You can still hear it on the soundtrack CD, however.)