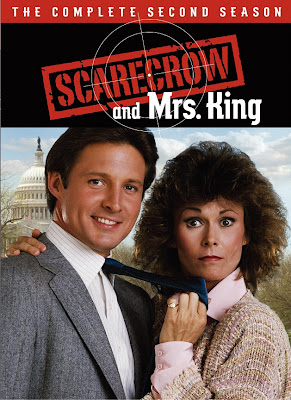 Finally!  A substantial week of spy DVD releases!  It's been a while since we've had so many.  Which isn't to say that there haven't been any; it's just that there've been few enough during February and most of March that it's been very easy for me to let the demands of real life overcome my  best blogging impulses again and again.  I will soon do a recap post summarizing all of the spy and spy-related DVDs I've passed over in the last several weeks, but for now, here's the lowdown on the wide offering available today! As usual, you can help support the Double O Section by ordering through the provided Amazon links. (Thank you!)

The highlight of the week's releases for me has to be Scarecrow and Mrs. King: The Complete Second Season. I've been eager to see more of this show ever since I finished the first season on DVD nearly a year ago (review here). Scarecrow and Mrs. King, which updated the spy-teamed-with-talented-amateur dynamic of The Avengers for America in the 1980s, was really the only bona fide hit spy series on American television during that decade. As The Avengers found bizarre espionage plots in the mundane and ordinary of 1960s Britain (milkmen, nurseries, butlers, cats), Scarecrow and Mrs. King explored such conspiracies hidden beneath the surface of Eighties suburbia (Avon ladies, Winnebegos, football). Again and again, secret agent Lee Stetson (Bruce Boxleitner) found himself facing a scenario that really called for the expertise of an "ordinary housewife," which was his queue to call upon his (not so talented at first) amateur sometime partner, Mrs. Amanda King (Kate Jackson), who was exactly that. But the series isn't purely romantic wish fulfillment for housewives. (And even that was not a new notion here; it was integral to the formula of The Man From U.N.C.L.E. two decades earlier.) It's a genuinely entertaining light spy adventure that should appeal to spy fans of all stripes - especially those with a fondness for Eighties TV. The suggested retail price is $39.98, but it's more than $10 cheaper on Amazon right now. 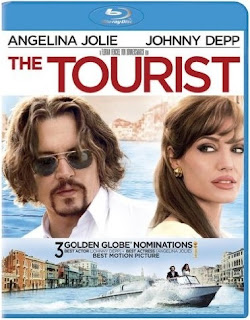 The Tourist
Florian Henckel von Donnersmarck's widely reviled attempt at a throwback to the light and easy tone of the glossy Hitchcock (and Hitchcockian) thrillers of the Fifties and Sixties comes to DVD, Blu-ray and DVD/Blu-ray Combo today courtesy of Sony. It didn't go over well with critics (or audiences, for the most part), but I have to say, I didn't hate The Tourist. In fact, while I can certainly see why others did, I found a lot to enjoy in it. It's not a particularly good movie, but it's a fun one for fans of that sort of fluffy entertainment with big stars in haute couture capering around beautiful, exotic European cities. Venice, in fact, is the real star of the film, and von Donnersmarck makes it look amazing. If you're a fan of the travelogue side of the spy genre, you might well be surprised. Furthermore, The Tourist marks Timothy Dalton's return to spying (more or less) as a chief Interpol agent, and that alone is worth the price of admission for fans of his 007. His part isn't very big, but stick with it, because he gets more screen time in the third act. In fact, he gets to go up against former Bond villain Steven Berkoff (Octopussy), which is pretty cool! Megastars Johnny Depp and Angelina Jolie star alongside Dalton and Venice. Extras on the DVD include a commentary with von Donnersmarck, the featurettes "A Gala Affair" and "Bringing Glamour Back" and an outtake reel. The really interesting sounding featurettes, unfortunately, are reserved exclusively for the Blu-ray releases, which include all that other stuff as well as the additional featurettes "Canal Chats," "Action in Venice" and "Tourist Destination - Travel the Canals of Venice." Retail is $28.95 for the DVD, $34.95 for the BD

and $38.96 for the combo, but of course you can find all three cheaper on Amazon and other sites. 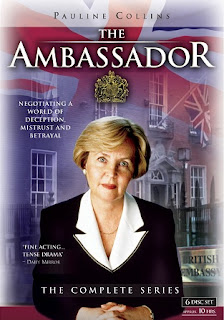 The Ambassador: The Complete Series

I really don't know much about The Ambassador at all, but this late 90s British drama series seems to be more of a political thriller with spy overtones.  According to the copy for this BFS release of The Complete Series, "Pauline Collins (Shirley Valentine, Upstairs, Downstairs) stars as Britain's Ambassador to Dublin, Ireland, one of the country's most coveted - and potentially explosive - Embassy posts. Supported by her Commercial Attaché and MI-6 operative John Stone (Denis Lawson - Bleak House), Harriet uses both diplomatic skill and common sense to bravely face issues ranging from territorial disputes, kidnapping and cults to sabotage and murder. Continually under fire, the Ambassador treads a minefield of Anglo-Irish tensions as she strives to prevent her personal life from clashing with her professional career - and her duty to Britain." Lawson's MI-6 agent appears to be a main character, and his missions factor heavily in many of the episodes, whether he's ordered to engage in cover-ups on behalf of Her Majesty's Government or tasked with protecting Collins' titular Ambassador, Harriet Smith. Sounds worth checking out! SRP for the six-disc set is $54.98, though it can be found cheaper at various online retailers. 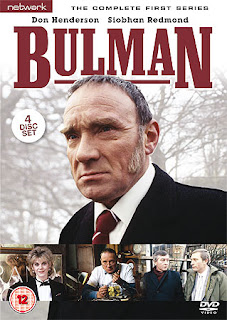 Meanwhile, on the other side of the pond, we have another eagerly-awaited Region 2 ITV release from Network: Bulman: The Complete First Series. Don Henderson makes his third go-round as (now former) Detective Inspector George Bulman, following previous series The XYY Man and Strangers, in this mid-Eighties series that rejoins the eponymous hero after he's left the police force to set up shop as an antiques dealer/clock repairman... but soon finds himself drawn back into the London underworld and international espionage as a private investigator. Thorley Walters (Tinker, Tailor, Soldier, Spy) also reprises his Strangers role as Bulman's Secret Service contact, William Dugdale, who gets the wily ex-cop entwined with such spy staples as sabotage, subterfuge, defectors, conspiracies and of course a beautiful KGB assassin who uses ice bullets. Bulman: The Complete First Series, a four-disc Region 2 PAL DVD set, retails for £40.84, but can currently be had for just £35.74 from Network's website.
Posted by Tanner at 1:59 AM

Hmmm. Once again, I can't recall THE AMBASSADOR being shown here in England. Is it my memory, or what?!

As for BULMAN, this is a quirky and rather enjoyable series, a spin-off from an earlier police series called STRANGERS (also on Network).

The Dugdale character (who popped up occasionally in STRANGERS too) is indeed a crusty but likeable intelligence chief of 'the old school' (eg public school background, Oxford educated type). He appears now and then throughout the BULMAN series.

It would be wrong to purchase BULMAN on the basis that it is a *spy* series, because overall it very definitely isn't. Crime series undoubtedly - spy elements only now and then.

Thanks, Anonymous! I don't get the impression that The Ambassador is an out and out SPY series either, but if spying plays a significant part in a show, I generally try to mention it here, even if it's not the thrust. And it just so happens that spying tended to pop up quite a lot in all of ITV's cop and detective shows throughout the Cold War, which may explain while I like them so much! From Dave Rogers' episode guide, it looks like about half the first season episodes of Bulman feature some sort of espionage plot, and I like those odds!