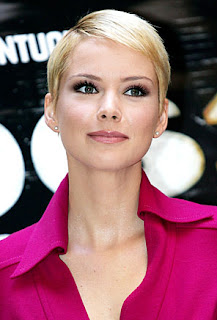 In Deadline's original story a few weeks ago about Chris Vance being cast as the new Transporter for Cinemax's TV version of the Luc Besson-produced, Jason Statham-starring neo-Eurospy franchise, the trade blog also reported that Andrea Osvárt would be the new Transporter Babe. This seemed to merit its own headline here, since my 2008 post identifying Natalya Rudakova as "the new Transporter Babe" in Transporter 3 remains to this day one of the most popular articles in the history of this blog. (Who would have thought?) Anyway, in the true Eurospy tradition, the women in the Transporter movies were pretty disposable. Like Bond Girls, each one was unique to the film she appeared in, and audiences didn't expect them to come back.  (Rudakova, in fact, was the only one Statham's Frank Martin was even romantically involved with.) Apparently the TV series will be different.  Now Frank has a "handler." (See? I keep telling you transporters are a lot like spies!)

According to Deadline, "The series centers on professional transporter Frank Martin (Vance), a role played in the movies by Jason Statham. Operating in a seedy underworld of dangerous criminals and desperate players, Frank can always be counted on to get the job done -- discreetly. Osvárt, repped by Innovative and Mosaic, will play Frank's handler Carla, an extremely crafty former CIA operative who organizes his missions, acts as his eyes and ears on the outside, and continually stokes the flames of their unrequited attraction." That seems about right for a TV version. TV's Frank (no relation to Dr. Forrester's sidekick, I presume) needs a beautiful sparring partner for unrequited attraction. (See: Burn Notice.) And there's certainly no denying Osvárt's beauty--or her credentials. Like Rudakova and Olga Kurylenko (who also started out as a neo-Eurospy babe before graduating to Bond Girl), the 32-year-old Osvárt hails from Europe. She was born in Hungary where she began a modeling career that took her to Italy and France, and led to acting. She's also got some spy experience, having played small roles in Duplicity and Spy Game. I look forward to seeing what she brings to the latest incarnation of The Transporter.

Speaking of the Transporter himself, perhaps I was a little hard on Chris Vance in my original post about his casting.  EW has an interview with him accompanied by a photograph (or is it Photoshopped?) that looks suitably Transporterish and goes a long way on selling him in the part. Plus, he seems to come off as a nice guy. I'll give him the benefit of the doubt and wait to see how his Transporter shapes up.

So we know the male and female leads in the series, but I have yet to see confirmation of its real star: what kind of car will Frank Martin be driving on cable? (In other words, what company will pony up for the potentially lucrative product placement deal?) In the first movie, it was a BMW. In the second two, it was an Audi, which has become more associated with the character. But on television, it could conceivably be something completely different.
Posted by Tanner at 12:29 AM

I was trying to think who would be better cast as the tv version of Frank Martin when I re-watched the pilot to the '90s tv series The Sentinel and realized that Statham, when I first saw him, reminded me of Richard Burgi without hair. I think Burgi's hairline, which was struggling not to recede any further while he was playing James Ellison, has probably receded enough that he would be perfect for the role.

You're right; he's certainly got the hairline for it! But he's also got nearly ten years on Statham; might be a little old at this point... Good actor, though.

The slapstick fight scenes are why I liked Statham's series.

Yeah, of course. Me too. The main draws for me are Statham himself, who I like, and the daffy action. I really doubt they have Corey Yuen on board to choreograph the action in the TV version, so it will be interesting to see if they can replicate it on the small screen...