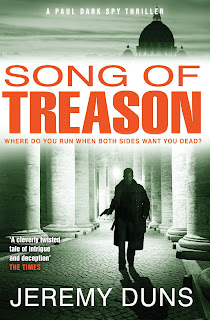 Author Jeremy Duns had a big update on his blog last week about what the future holds for his Paul Dark spy series, including a title change in Britain, a US publication date (at long last!) for the second book and a BBC adaptation. If you're not familiar with this series and you're reading this blog, well, you really should be! Duns is a true scholar of spy fiction and a true fan as well, and his passion for the genre comes through in spades in his well-written, Sixties-set novels. The first book, Free Agent, is definitely one of my favorite new spy novels of the past few years, and the sequel, Free Country, is a terrific follow-up. One of the things that makes these books so much fun is that Duns has managed the neat trick of bridging both sides of the spy genre: the "desk spy" and the "field spy" in a unique way. While Greg Rucka very successfully follows The Honourable Schoolboy model, simultaneously tracking the connected storylines of the planner at the desk and the agent in the field, Duns opts to go the Smiley's People route, in which the desk man becomes a field man. But while Le Carré's novel puts his quintessential desk man George Smiley back in the field after far too many years as a sort of fish out of water, Duns' hero, Paul Dark, is a man of action closer to James Bond than Smiley who feels more out of his element in the corridors of Whitehall than running through the streets of Rome. Yet Duns himself seems at home writing about either side of the spy world, and contrives a far-fetched yet serviceable scenario to get his high-level intelligence official into car chases and foot chases.

The second book, Free Country, however, is undergoing a title change for its UK paperback edition, due out in August. It will now be known as Song of Treason. Duns reports that the change came about because his publisher "felt there was a danger that Free Country might not signal to those who hadn’t read the first book in the series, Free Agent, that it was a spy thriller." Hm. Personally, I certainly prefer the original title (and like the idea of all three novels in the trilogy beginning with "Free"), but what do I know about publishing? I hope the new title signals its genre well and that the book attracts all the readers is deserves.

As nearly a year has gone by since the book's initial UK hardcover publication, I was starting to despair for the prospects of a US edition of Free Country, but happily Duns reports that it will be out in America, from Penguin, sometime next year, and, unlike the British paperback, it will retain its original title! The third book in the trilogy will also retain its long-time working title of Free World whenever it's finally published in the US, but in Britain and Canada, where it will be out in February 2010, it will (somewhat confusingly) be known by the Ludlumesque moniker of The Moscow Option. It can currently be pre-ordered from Amazon.co.uk for half price, but be warned if you haven't yet read the second book that the synopsis for the third contains spoilers.

But that's not all the Paul Dark news there is! Here's the real cause for celebration, per the author: "Although the trilogy ends there [with Free World/The Moscow Option], Paul Dark does not, as I’ve just signed a new contract with Simon & Schuster and am hard at work on a fourth Dark novel, set in 1971. This continues his story from the first three books, I hope in an unexpected and exciting way." I'm already excited by this unexpected revelation!

Finally, Duns touches on last year's news that the series had been optioned for television by the  BBC. Apparently, development continues apace, with Timothy Prager penning the adaptation. Prager's previous spy experience includes the 1990s TV series The Ambassador (which focused in part on the MI6 operative assigned to Britain's embassy in Ireland) and the 2003 Michael Caine/Michael Keaton thriller Quicksand.

In addition to his novels, Duns' blog, The Debrief, is essential reading for spy fans.
Posted by Tanner at 1:36 PM