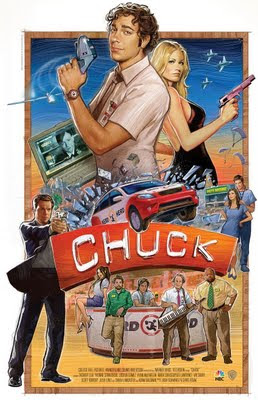 It's the end of an era when NBC's comedic geek spy show Chuck airs its series finale tonight. That makes me realize how long I've been doing this blog... long enough that a new spy series has premiered, enjoyed a respectable five-season runs, and ended all in the time I've been blogging. I mean, it's one thing for flash-in-the-pan series like UnderCovers or CHAOS to come and go, but Chuck was for real. When I first reviewed the pilot after seeing it early at Comic-Con in 2007, I wasn't terribly impressed. I revised my opinion, however, after watching it again (in a slightly different cut) when it aired, and by the second episode I was a fan. Over its course Chuck has had a lot of ups and downs. By Season 3 I thought it was severely sagging, but former 007 Timothy Dalton proved to be exactly what the series needed to rebound in Season 4. Without Dalton, however, and owing to a fairly lame plot point involving Chuck's best friend Morgan gaining the superspy skills of the "Intersect," the fifth season has had its share of disappointments. It's probably time for Chuck to end, and I'm eager to see how the writers do that.

Throughout its five seasons (and despite surviving a long, momentum-sapping hiatus due to the writers' strike during its first season), Chuck has been a fixture of NBC's "bubble" each year, a show constantly in danger of cancellation. This danger proved to be a blessing in disguise, however, as it united the cult show's fans, who showed their support each year through various wacky means sometimes involving Subway sandwiches. Ultimately, the perpetually endangered Chuck even proved to be a reliable rock in NBC's increasingly troubled line-up. Reliable enough, in fact, that its final renewal was its most painless pick-up, and the producers had plenty of time to plan an actual ending rather than delivering an unsatisfying one due to cancellation.

Really enjoyed the Timothy Dalton episodes last season. I was disappointed in the Morgan episodes this season, but this season was redeemed with the finale of Chuck trying to win his girl back.