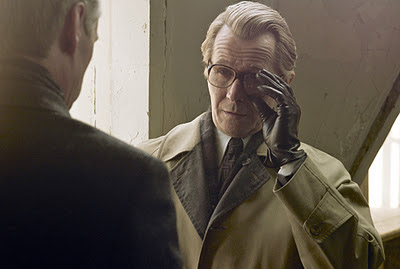 Tomas Alfredson's Tinker Tailor Soldier Spy, easily one of the best spy movies of recent years, expanded into more markets in North America this weekend, and entered the Top 10 at the box office at number 9... on just 809 screens, far fewer than any other film in the Top 10. That means it averaged an impressive $7,129 per screen (according to Box Office Mojo), the second highest per-screen average on the chart, well ahead of number 2 film Mission: Impossible - Ghost Protocol. The Hollywood Reporter reports that "Tinker Tailor flourished in surburban markets--a theater in the surburbs north of Oklahama City was No. 5 in the country--as well as continuing to thrive in holdover art house locations." It's good to hear that there's demand for cerebral John le Carré adaptation outside of big cities, bearing out Roger Ebert's recent essay which pointed out things that should be obvious and partly blamed the 2011 box office slump on Hollywood's stupid misconception that "small-town moviegoers don't like 'art movies.'" I'm sure there's a lot more demand for the film in the markets it still hasn't opened in, too. Focus Features will continue to expand Tinker Tailor Soldier Spy in the weeks ahead, so if it hasn't played in your town yet, just be patient. It will. And you've got something truly special to look forward to!

Read my review of Tinker Tailor Soldier Spy (2011) here.
Read my introduction to George Smiley here.
Posted by Tanner at 2:47 AM