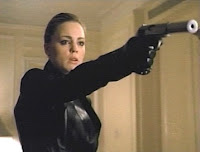 The BBC has revealed more details about Nemesis, their new Melissa George spy series from Kudos (Spooks/MI-5) and Frank Spotnitz (producer of the American version of Strike Back) that we first heard about last fall. The 8-part series, which will air on BBC One in Britain and Cinemax in America, stars George as Sam, a top operative for an elite private intelligence contractor who learns that someone on her team wants her dead, but doesn't know who or why. Other cast members include Adam Rayner (Undercovers), Stephen Dillane (Spy Game), Adewale Akinnuoye-Agbaje (Killer Elite, Strike Back), Lex Shrapnel (Captain America: The First Avenger), Uriel Emil (The Bourne Ultimatum), Patrick Malahide (The World Is Not Enough, The Long Kiss Goodnight) and Stephen Campbell Moore (The Bank Job, Johnny English Reborn). Location filming will take place in Scotland, London and Morocco. The usual Bourne comparisons are thrown around by the Beeb ("a complex and mysterious Bourne-style female spy unlike anyone we've seen on TV before"), but the such shorthand probably does the series a disservice. Spotnitz promises "huge story twists and turns, and intriguing characters who are both emotionally and morally complex." It sounds like a bit of a combination of Strike Back and Tinker Tailor Soldier Spy, and if Spotnitz pulls that off, I'll be very pleased!
Posted by Tanner at 1:06 PM

Sounds potentially very good, I think. Especially since Melissa George is in it:-)

It'll be a long way from her role years ago as 'Angel' in the Aussie soap HOME AND AWAY, that's for sure...!

"It sounds like a bit of a combination of Strike Back and Tinker Tailor Soldier Spy..."

That description there sounds like Greg Rucka's "Queen and Country" book series, and that's potentially a very good thing!