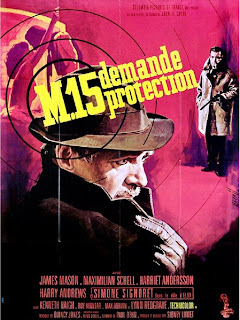 Part 4 of an ongoing series, "The Smiley Files," examining the career of George Smiley in literature and film. Read my introduction to Smiley here.


Note: This review incorporates and updates an earlier review of this film that I wrote in 2008.

Sidney Lumet's The Deadly Affair is based on John le Carré's first George Smiley novel, Call for the Dead (review here). Though it introduced the author's famous hero, Call for the Dead is generally considered one of  le Carré's less significant works.  The movie, with its more generic title, is even more obscure, though it's overall quite a good adaptation in that it actually improves on the book in some respects. Both are well deserving of rediscovery in the wake of the Tomas Alfredson's fantastic, high-profile new film version of Tinker Tailor Soldier Spy (review here). However, fans coming to this movie from that one might be slightly confused at first by the lead character's name. Because Paramount owned the rights to the name "George Smiley" for their film of The Spy Who Came in from the Cold (in which Smiley plays a relatively small part), Columbia had to change the name of the protagonist to Charles Dobbs. That’s too bad, because James Mason gives a really great interpretation of Smiley in Dobbs. (Even if, like most screen Smileys up until Gary Oldman, he's prone to wearing hats, something the Smiley of the books steadfastly refuses to do.) 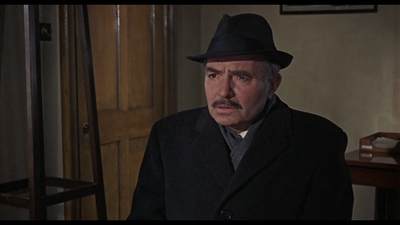 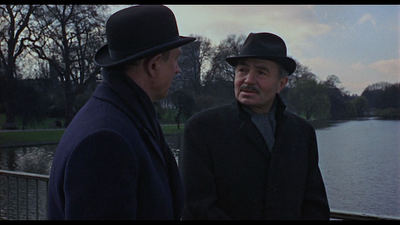 Like the book, the movie begins with Smiley–er, Dobbs–interviewing a senior civil servant named Samuel Fennan in the park. An anonymous letter came in revealing Fennan’s involvement in communist circles back in his prewar college days and questioning his present-day loyalty, so as a formality the Security Services are obliged to check him out. Dobbs suggested the park instead of his office to spare the man any undue embarrassment. Indeed, Fennan seems very pragmatic about his idealistic college days (everyone wants a cause at that age, he argues, and for those who hated fascism, it was communism), and appears to be a loyal British subject. Smiley/Dobbs gives him his stamp of approval and routes it to his boss. 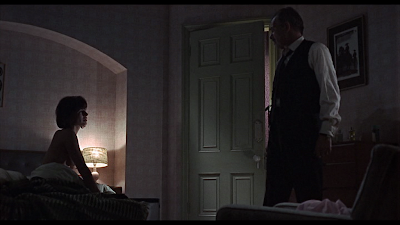 That night he’s awakened at an ungodly hour with a phone call: Fennan has killed himself. Going out, he passes his unfaithful, nymphomaniac wife, Ann (Harriet Andersson) coming in, and they have an argument they’ve clearly had a hundred times before. Mason excels as the conflicted cuckold, playing up a rather pathetic side of Smiley's personality that fades to the background in other performances. He clearly loves his wife very much and wants to forgive her condition, but the jealousy is tearing him up inside. Pushed near breaking point in his personal life, he dives whole-heartedly into his professional life, determined to solve the mystery of Fennan’s death. If the man was really loyal, why would he kill himself? 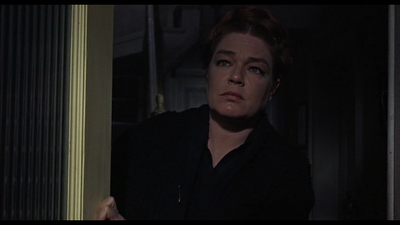 Dobbs interviews Fennan’s wife, Elsa (Simone Signoret), a concentration camp survivor who chastises him for playing games with people’s lives. She sees no importance in her husband’s loyalty or lack thereof, only that Dobbs and the Security Services are responsible for his death. 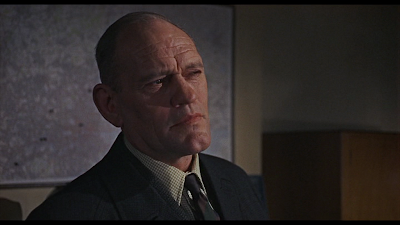 Amidst the usual interagency animosity, Dobbs teams up with Inspector Mendel, a narcoleptic, semi-retired Special Branch policeman played masterfully by the incomparable spy stalwart Harry Andrews. Andrews was seemingly in almost every British spy movie in the Sixties, and he’s always a joy to watch. This may be his best role. Spurred on by a wake-up call ordered by the dead man the night before (why would a suicide bother to arrange a wake-up call?), Dobbs and Mendel engage in a thorough, exciting investigation in the course of which they cross paths with Roy Kinnear as a greedy, polygamist informant, a hulking Nordic brute nicknamed Blondie who wants Dobbs dead, and Dobbs’ own boss, Maston (Max Adrian, perfectly channeling the character from the book), who–in the grand tradition of such bosses–wants him off the case. 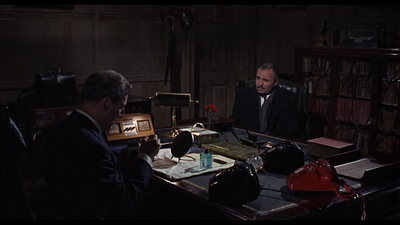 While there are infrequent bursts of violence, le Carré relishes instead the inherent drama and humor of bureaucracy, and the mechanics of a thorough investigation. Though his stories are set in the murky world of international espionage, le Carré is a mystery writer at heart, and he’s constructed a good one here. Screenwriter Paul Dehn (who also co-wrote Goldfinger and The Spy Who Came in from the Cold in the two consecutive years preceding this movie, and went on to such varied fare as Murder On the Orient Express and Beneath the Planet of the Apes) does a good job with the difficult task of making Le Carré’s complex mystery and bureaucracy cinematic. While hardly action-packed, The Deadly Affair is never dull. 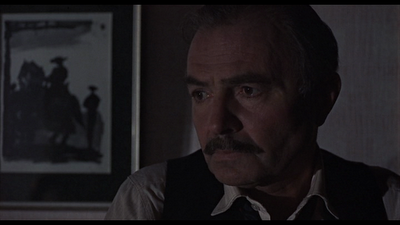 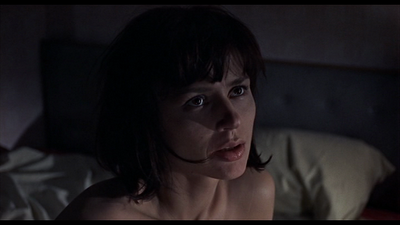 In one respect, Dehn even improves upon the novel, by integrating Ann fully into the story. In the book, Ann has already left Smiley, though she remains constantly on his mind. It would be difficult to depict the constant presence of an absent character on screen, so it makes sense for Dehn to write her back into the plot. He also works her directly into the central mystery in the very manner that le Carré himself will later use in Tinker, Tailor, Soldier, Spy, so I'm guessing the author was to some degree influenced by this adaptation. Andersson (more than twenty years Mason's junior, unlike in the novel) is definitely not le Carré's well-bred English aristocrat Lady Ann Smiley (née Sercombe) but she still manages very ably to convey the essence of the author's enigmatic character who looms so large in Smiley's life. In fact, she somehow manages to embody exactly the Ann I picture reading the books, despite being too young and a Swede! Andersson and Mason build an entirely credible, if utterly dysfunctional, relationship between these unlikely partners. 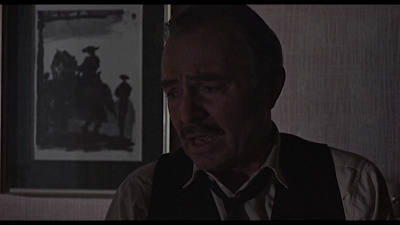 Other changes from the novel left me less satisfied. Mendel's fate on film, for instance, is quite different from that in the text, and would not work well with the books that follow. Furthermore, that particular change seems completely unmotivated. 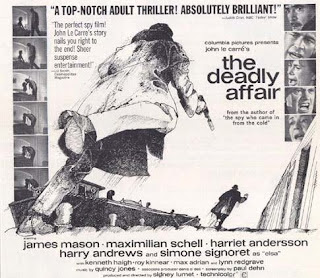 There are actually two mysteries unfolding in the movie: whether the traitor was actually Fennan or his wife (and who wrote the letter condemning Fennan to begin with), and the identity of their contact. The latter is rather obvious, but the former keeps the audience guessing right up to the final revelation. At the same time (and as much as he’d rather lose himself in his work–or drink–and forget it), Dobbs’ personal life remains hell, and his investigative talents come to hurt him in that arena when he can’t help but deduce that his wife’s latest lover is one of his oldest friends, an agent he ran during the war (Maximillian Schell). Mason does a first rate job as a man grasping desperately at a professional conundrum in order to ignore a personal one–only to discover it’s impossible. 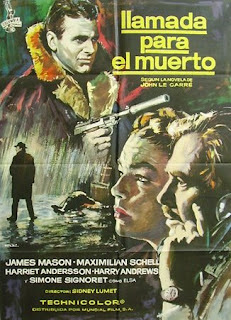 The Deadly Affair is a highly enjoyable spy film, and a thoroughly gripping and generally faithful le Carré adaptation. James Mason makes a great Smiley (I know, I know... Dobbs), and it's too bad that his contribution to the filmic history of the character is often overlooked thanks to the long shadows of Alec Guinness’s later, definitive portrayal in two British miniseries, and Gary Oldman's Oscar-nominated turn in the new movie. Mason is even believable when provoked to uncharacteristic violence at the finale. A rarity when I first reviewd it several years ago, The Deadly Affair is now available on Region 2 DVD and as an MOD title in Region 1 as part of the Colombia Classics On Demand program. It's also available streaming through Amazon Instant Video. For le Carré fans or fans of Sixties spy cinema, it's well worth seeking out. 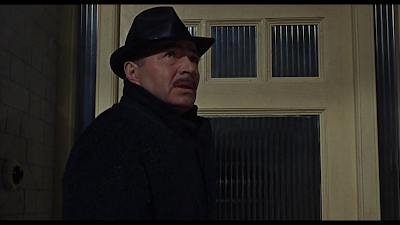 I like the look of the film, the locations and the general tone of London in the 1960s, but I much prefer the book. For me, The Deadly Affair is on a similar level to The Looking Glass War

What don't you like about it, Mark? Part of the reason I like it so much may be because I originally saw it before I'd read the book, but I really do think that the Ann plotline is a big improvement over the novel, and that Mason and Andersson are great together. I've never seen le Carre comment on it, but I really have to wonder if he got the idea for that part of TTSS from this movie.

I think a big part of why The Deadly Affair has fallen into undeserved obscurity is because the story is so simple and straightforward relative to the brilliantly twisty The Spy Who Came in from the Cold that by the time Deadly Affair came out, it was just too old fashioned for spy audiences of the time.

As for Looking Glass War, I'll be getting to that soon enough...

Based on your recent reviews of the book and the film, I decided to reread the novel (after about 30 years) and watch the film for the first time.

The novel I did enjoy. Very straightforward and not as dense as Tinker, Tailor, with a very good introduction to Smiley. I found it interesting that le Carre spent almost a whole chapter at the end recapping the plot line of the story. Maybe he was trying very hard to hit that 170 page limit.

The film was a pretty faithful representation of the book, with a few changes. Haryy Andrews was perfect as Mendel, allthough I agree with you on his ending. The character of Ann is the one I had a problem with. I always pictured her as this well bred aristocrat who gets bored with life and runs off with every new "boy toy". In the books, she is never physically there, but is always there in the mind of Smiley, who we learn throughout the novels is his one weakness.

Thank you for your reviews. Next, I'll visit A Murder of Quality which I've never read.

I'm happy my reviews inspired you to re-read the book, Bob! Thanks for the comments. Yes, the movie Ann is certainly far from the characterization in the novels, but I still feel that the actress really captures a certain part of her amazingly well, and the relationship between she and Mason is fascinating. Enjoy A Murder of Quality!