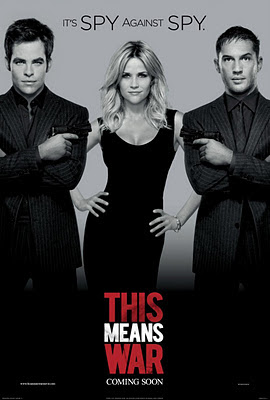 The action/romantic comedy is a really hard genre combo to pull off. Attempts at such desperate marriages—always appealing to studios, as done well, they could potentially bring in men and women in equal numbers—usually fail. But This Means War had a pretty promising pedigree. The director, McG, recently wrapped producing duties on the long-running spy series Chuck, which deftly pulled off that unique combination for most of its run. Even more promisingly, co-writer Simon Kinberg had penned one of the most successful attempts ever at combining those two disparate genres, Mr. & Mrs. Smith

(2005). His audio commentary on that DVD, in fact, is a master class in concocting such a blend. (And he admits that a lot of trial and error went into perfecting it in that movie.) And, finally, the stars seemed like a promising fit for such an amalgamation. Reese Witherspoon has long ago mastered the romantic comedy, and Chris Pine (Star Trek, and the upcoming Jack Ryan reboot) and Tom Hardy (Tinker Tailor Soldier Spy, Inception) are two of the most promising young action stars out there. All in all, these people seemed like the right creative team to succeed in mixing the spy and rom-com genres. Therefore, I went into This Means War with high hopes and low expectations. Unthrillingly, it exceeded those expectations (slightly), but failed to live up to my hopes. It’s neither great nor awful, but it’s more awful than great. Mostly, though, it just is.

Neither spy movies (of this shoot ‘em up ilk, anyway) nor glossy romantic comedies tend to take place in a recognizable real world. And This Means War certainly doesn’t. It takes place in a world of conspicuous consumption, in which everyone has loads of money to spare. Witherspoon’s character, Lauren, works at a consumer goods testing company decorated in huge swatches of bright colors, where workers toil away the hours spraying products with water hoses and flame throwers. It’s sort of the Consumer Report equivalent of SPECTRE Island. Lauren lives in an incredibly spacious Los Angeles house, and those aren’t cheap. If she actually runs the company (which isn’t entirely clear), then perhaps that’s plausible. Chris Pine’s character, however, shoulders not only the unlikely name of “F.D.R.,” but a most unlikely lifestyle for an orphan who’s gone into government work. He lives in a luxurious bachelor pad that might make Diabolik jealous, complete with a swimming pool seemingly stocked with bikini beauties running the length of his glass ceiling. It’s the sort of place usually seen being broken into by Jason Statham with the objective of killing a drug lord. In addition to being a world of conspicuous consumption, this is a world of indeterminate time. But rather than recreating a specific, distinctive era (how cool would it be to set a spy rom-com in the pre-Swinging Sixties of Doris Day and Dr. No, along the lines of Down With Love meets OSS 117?), it appears to take place about a decade ago—which may just indicate a script that’s been in development for that long. This is a world where there are still giant video stores in downtown Los Angeles. Cool ones, too, with entire rows of the Criterion Lady Vanishes DVD faced out, which no Blockbuster I ever shopped at would have had. It’s okay for spy movies and romantic comedies to take place in unrecognizable realities on their own (and both genres certainly tend to play up the conspicuous consumption), but I feel like a more grounded world would have better suited the mixture of the two. As it stands, there’s really no relatable point of entry: not the guys, not the girl, not the world. 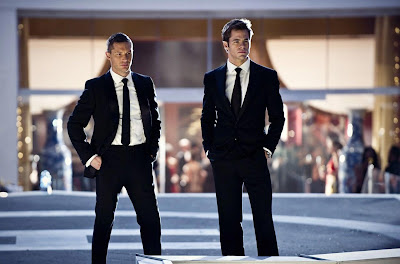 F.D.R. and Tuck (Hardy) are best friends who work together at the CIA—in its luxurious Los Angeles field office, which suits makers of films and television much better than Langley. (Their boss is an utterly wasted Angela Bassett, who also briefly headed up the CIA’s massive Los Angeles branch on a late season of Alias.) The script seems to hint that they’re even more than friends—either foster brothers (they seem to share a foster grandmother, but that plotline appears to have been excised) or gay lovers (in one particularly awkward scene, F.D.R. insists that Tuck recall an instance in Bangkok when he glimpsed his penis), either one of which might have made this premise more interesting. But of course it doesn’t actually go in either of those potentially promising (however unlikely) directions. Instead, the two bosom buddy colleagues both fall in love with the same woman—Lauren. To the credit of Kinberg and co-writer Timothy Dowling, this amazing coincidence is actually sold fairly plausibly, all things considered.

Tuck, who meets Lauren through an online dating service, is the nice guy. (“Safe,” as she puts it to her confidante, played by a typically annoying Chelsea Handler.) He’s got a young son from a previous marriage and he takes her on thoughtful dates like an impromptu trapeze session at what appears to be a closed circus. You know, like you do. F.D.R. is the sleazy ladies’ man, who tries to pick her up in the aforementioned video store, fails, and persists by following her to her place of work and shanghaiing one of her product testing focus groups. (Actually, this is one of the film’s best scenes, full of the kind of banter you expect from good romantic comedies, and Pine sells the seduction by delivering his double entendres with charm to spare.) He takes her on thoughtless dates that seem to have worked on a lot of women before her, trying to impress by ushering her past long lines into noisy, trendy dance clubs where he knows the doormen and the DJs. 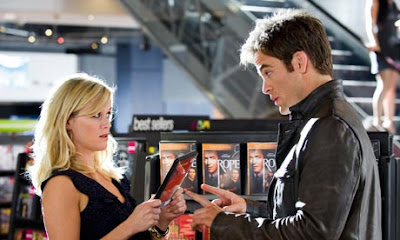 When the two spies discover they’re competing, they pull out all the stops and spend millions of taxpayer dollars by railroading CIA resources to spy on Lauren (learning all about her to give them the dating advantage) and sabotage each other’s efforts. The upshot is a lot less fresh than when Arnold Schwarzenegger’s Harry Tasker pulled the same trick to spy on his wife in True Lies, but no less creepy—and no less expensive! At one point, Tuck cavalierly shoots down a drone that F.D.R. has re-routed to spy on his friend. After the recent drone crash in Iran, audiences are fully aware of how much that costs. These guys’ abuse of Company technology makes 007 look like a model of responsibility! But of course that sort of analysis is beside the point. This is a comedy, and we’re not supposed to be thinking about such things. The fact that I was thinking about them speaks to the effectiveness of the comedy.

You would think that a movie in which two potential suitors make a bet out of a woman’s affections and then invade her privacy and her personal space to win that bet would end with the woman getting the better of them. Maybe she goes off with a more deserving man, and leaves them with what they deserve—each other. Or maybe the script is more clever than that, and she turns out to be an enemy agent herself, who’s been purposely diverting their attention this whole time, getting the better of them? No. Sadly, this movie has no such rewarding twists up its sleeve. Instead, she actually chooses between them (even after learning the truth), and her choice seems completely arbitrary. In fact, it seems like she chooses the less appropriate mate based on all of the information the movie has provided us with. And we’re not privy to the reasons why. The other one then ends up with a random character who hasn’t been developed as a presence in the film at all up until that moment—just to keep the ending “happy.” 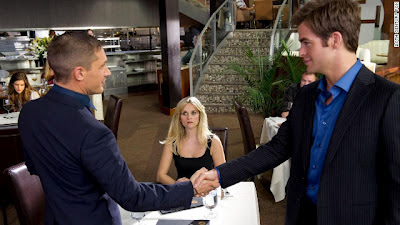 If This Means War is unimpressive as a romantic comedy, how does it fare as an action movie? For the most part, equally unimpressively, I’m sorry to say. McG demonstrated on the Charlie’s Angels movie that he’s capable of masterful over-the-top action scenes in a comedic vein, and I was hoping for a few of those. Instead, we’re treated to a messy and unoriginal shootout in a rooftop club and a close-quarters fight lit by strobe lights that impede any comprehension of what’s happening. The inevitable fight between the two colleagues, in which they destroy two levels of an upscale restaurant, is considerably more impressive, but unfortunately it’s so hard to root for either of them by that point that its impact is deadened on arrival. The only truly rewarding action setpiece comes in the form of a freeway chase at the finale, but that seems to be happening because the genre (or one of them, anyway) requires it to and not because the plot does.

So that all sounds pretty miserable, right? Why, then, did I begin this review by stating that it wasn't awful? This Means War has one saving grace that makes it at worst watchable and at best entertaining at times: the game performances by the three leads. Pine, Hardy and Witherspoon each put their all into this film, and do their best to sell lines and situations that are frequently beneath their talent. And, for the most part, they do sell them. That scene in which F.D.R. interrupts Lauren’s focus group to ask her on a date is a case in point. In other hands, the character might have come off as obnoxious in the extreme, and be seen as bullying her into going out with him. But Pine uses his considerable charm to sell the dialogue (including lines like, “maybe this grill can’t handle a guy like me”), and the scene comes off as him winning her over rather than him forcing her to bow to his demands. Witherspoon gives as good as she takes, and she, too, sells her lines, even saddled with a hopeless character whose actions make very little sense. Hardy’s equally capable, and achieves the difficult feat of making us care about a character constructed entirely from leftover clichés. It’s actually a treat to watch these three on screen, even when they’re acting their way out of the cringe-inducing situations in which the writers have trapped them. And for that reason, I can’t entirely hate This Means War. I can’t give it a very enthusiastic recommendation, either, though, for all of the reasons discussed above. I guess that makes it, overall, a wasted opportunity.
Posted by Tanner at 1:22 AM