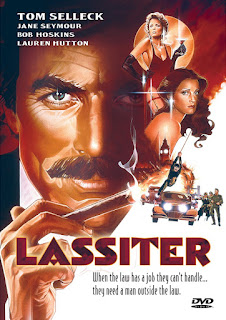 One of my favorite 80s movies and one of my favorites of the cat burglar-forced-to-spy subgenre, Lassiter is coming to DVD! On April 24. I figured the only way we'd ever see a Lassiter DVD at this point was on MOD, but this is an actual DVD from an obscure company that specializes in obscure movies that are particularly awesome: Hen's Tooth Video. No matter what else they did, I would be forever indebted to Hen's Tooth for their Region 1 release of my favorite Eurospy movie, Deadlier Than the Male. (If you don't own that and you're reading this blog, stop whatever you're doing, follow this link, and go buy it right now. Done? Okay, now we can continue.) The week before that, they're also releasing another great Tom Selleck period adventure from the same era (while he was trying to make up for missing out on Indiana Jones by grasping at anything like it), High Road to China. That one's not a spy movie, but it does have an excellent John Barry score. High Road to China will be available on both DVD and Blu-ray.

In Lassiter, Selleck plays the suave titular cat burglar, operating in 1930s London. When British and American Intelligence get wind of a major diamond shipment moving through the German embassy, the spooks force Lassiter to pull another job—for them, It Takes A Thief-style. As he plots the heist, he finds himself between two beautiful women: his sweet, long-suffering girlfriend, played by former Bond Girl Jane Seymour, and sexy femme fatale Lauren Hutton. Persuaders! composer Ken Thorne provides the jazz-heavy, period-appropriate soundtrack. One of my favorite moments to date toiling (fruitlessly, thus far) in the Hollywood salt mines of screenwriting came on a heist movie my partners and I were writing that had endured an excruciatingly lengthy development process, when one of the producers name-checked Lassiter on a conference call. I was so excited to discover that there was someone else in this industry for whom Lassiter was a touchstone (and reassured that despite the frustrations of the project, I was clearly working with the right person), and I hope that this DVD release makes it a touchstone to a whole new generation as well. It's a really fun movie, and for my money Selleck's best theatrical effort.
Posted by Tanner at 1:57 AM

The film I wish Hen's Tooth could get the rights to for region 1 release is the sequel to Deadlier Than The Male, Some Girls Do.

I know the sequel is not supposed to be as good as Deadlier, but I would like a legitimate release. The film also has one of my favorite 60's star, Daliah Lavi.

I wish Hen's Tooth would re-issue their earlier releases with anamorphic transfers. :)

Hopefully, LASSITER and HIGH ROAD TO CHINA will be formatted for modern displays....

Thanks Monty! I figured there were more Lassiter fans out there reading this blog...

Bob, I agree. I would LOVE to see them release Some Girls Do, even if it is inferior to DTM. (And it is.) Lavi is always worth watching. (Do you have the MGM DVD of The High Commissioner? That's worth picking up.) Besides, I was never convinced that the Network and R4 DVDs had the aspect ratio right on Some Girls Do. I know people say that fullscreen transfer is OAR, but I've seen it projected on 35mm, and I could have sworn it was wider than that, if not full scope.

Speaking of aspect ratios, Christopher, I'm with you in wishing DTM were anamorphic. I'm sure High Road to China will be, since it's coming out on Blu-ray. Now that I know Hen's Tooth is getting into the Blu-ray business, a BD of DTM (bound to be anamorphic) has jumped to the top of my hoped-for list!

Yes, I picked up The High Commisioner from Amazon for about $6 about a year ago. Not a bad film.