The pilot for ABC’s new spy series Missing, written by Gregory Poirier and directed by Stephen Shill, reinforces every preconception I already had about the show: It is Taken with a woman (in all sorts of ways), it is set primarily in Europe… and it is actually kind of awesome. The Taken comparisons are unavoidable, but there is a long history of television series that took their inspiration from popular movies and did just fine with that, eventually becoming very much their own things. Would we have had The Man From U.N.C.L.E. without the success of the early Bond movies? Battlestar Galactica without Star Wars? Tales of the Gold Monkey without Raiders of the Lost Ark? No, but those are all good shows (if not all successful ones). Missing owes more to Taken than simply its title and premise, in which a mother who’s a former CIA agent jets off to Europe to use her spy skills to find her kidnapped teenager (in this case a son instead of a daughter) at all costs. Missing also replicates Taken’s structure—and its flaws. Luckily (well, as long as you’re still watching, anyway), all of those flaws are up front, and once you get past them, there’s too much exciting action to really dwell on them. Assuming audiences can get past them, that is, because the first act is pretty wretched.

As with Taken’s first act, the moments spent establishing the former spy’s relationship with his or her teen offspring can only be described as cheesy—cheesy and saccharine, which isn’t a very appealing combination of tastes. A secret signal established between son and mother early on and used later in exactly the way you’d expect may induce not only groans, but actual vomit—depending on your tolerance for Aspertine. Furthermore, both ex-spook parents’ overprotectiveness and initial unwillingness to let said offspring travel to Europe seems laughable—until all of their worst fears come almost instantly true. Where Taken had Liam Neeson’s Bryan Mills exchanging groan-worthy dialogue over steaks and beers with his former CIA colleagues, Missing has the equivalent stock character for a female-driven TV show: the unbearably annoying sassy best friend (who’s basically Alias’ Francie with a flower shop instead of a restaurant). Luckily, there’s very little of that character once heroine Becca Winstone (Ashley Judd) leaves America at the end of the first act… though I do get the sneaking suspicion that the plan is to bring her back.

The Taken similarities don’t end with Act 1. Once in Europe, Becca basically follows the same game plan as Bryan Mills, following a trail of fairly clever clues, chasing down and fighting mysterious bad guys (and then regrettably killing them before they can provide any useful information), and hooking up with old contacts from her intelligence days. Some of these contacts are merely glimpsed in flashbacks in the pilot, but seem likely to turn up in person down the line. One who does materialize in the present, an Italian Interpol agent named Giancarlo, is a great role ably filled by the son of a famous Giancarlo—Adriano Giannini, who inherited his father’s charm (on ample display in Casino Royale and Quantum of Solace) and puts it to good use. I hope we see more of his character. The always reliable Cliff Curtis (Colombiana) turns in an equally engaging performance as a Paris-based CIA official who’s under orders to bring in the rogue former agent creating chaos all over Europe. 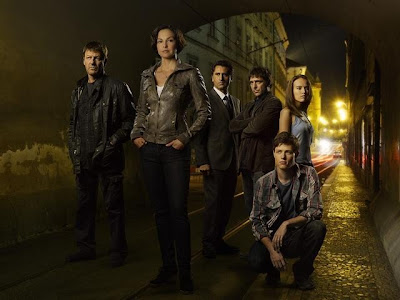 Becca Winstone is a strong character, but at this stage I’m still reserving judgment on Judd’s performance. She oozes a bit too much of a Lifetime vibe when required to play up the Soccer Mom or Concerned Mother angle, but excels at conveying the more badass aspects of her character. (I particularly liked it when Curtis’ character threatened to cancel her passport and she snapped at him, “Are you an idiot? I have passports hidden all over the world!”) Hopefully now that that initial exposition is out of the way and she doesn’t have to pretend to be an ordinary suburban soccer mom anymore, this is the side of her character the scripts will play up. Done properly, she conveys the desperation of mother who loves her son best through action anyway, just as Liam Neeson conveyed the corollary by showing the shocking lengths to which he was willing to go to find his missing daughter.

As in Taken, by the pilot’s final act Becca’s quest has brought her to upscale Parisian apartments on the Seine and even into the shadow of the very Eiffel Tower Neeson threatened to tear down if he had to. But this is just the pilot, of course, and there’s a lot of room for Missing as a series to stretch well beyond its derivative set up. (For one thing, Becca ends the episode being pursued by the CIA and Italian intelligence as well as the mysterious bad guys she’s after. Bryan Mills never had to put up with that!) Until it does, though, most of the derivations are likely to please fans of the Pierre Morel film. Shill’s action sequences are fairly spectacular for network television, and the actual European locations are even more spectacular. It’s been a long time since we’ve seen an American network spy show actually filmed overseas on a regular basis (maybe even since I Spy in the Sixties!), and for me the Rome and Paris settings were a highlight of the show. 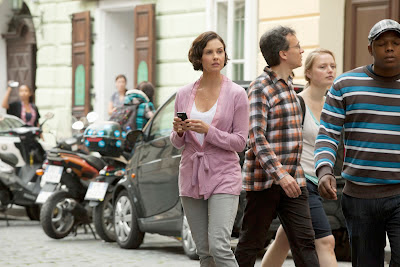 After the cliff-hanging conclusion to the pilot, I found myself eager to see where this story goes and what happens next. While not quite realized in its premiere (hampered primarily by that off-putting fist act), Missing has the potential to be great escapist spy television of the turn-off-your-brain variety—like Taken. Sure, it’s purely derivative, but when the sources you’re deriving from are essentially Taken and Alias, there’s nothing wrong with that in my book!

Read my review of Taken here.
Posted by Tanner at 1:24 AM

I think you and I came to the exact same conclusion!

Thanks for the link, Rob! I'm glad to see someone else was able to get past that awful stuff in the first act and see the potential here. Most of the reviews I've seen have been less positive. I hope people give this one a chance, though.

I was really looking forward to this, and had the same initial reaction as you guys to the point that I was ready to turn it off. Then that first fight hit and I was in. The action set pieces in the pilot are among the best I've seen on TV. After that, I admit that the non-action moments grew on me; not because the character moments improved, but because they were so remarkably bad that it provided a nice, kitschy counterpoint to the fighting.