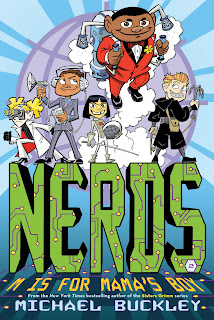 Trade blog Deadline reports that Elton John's Rocket Pictures (a company started by John and his partners Steve Hamilton Shaw and David Furnish with a mandate to produce family and music-themed projects) "is developing an animated feature from the Michael Buckley novel series NERDS, about kids who run a spy network from their elementary school." Buckley himself is writing the screenplay.

"NERDS" is an acronym for "National Espionage, Rescue and Defense Society," and according to the Amazon blurb, the series "combines all the excitement of international espionage with all the awkwardness of elementary school, and the results are hilarious. A group of unpopular fifth graders run a spy network from inside their school. With the help of cutting-edge science, they transform their nerdy qualities into incredible abilities! Their enemies? An array of James Bond–style villains, each with an evil plan more diabolical and more ridiculous than the last." Sounds good to me! Rocket Pictures is responsible for last year's Gnomeo and Juliet and its upcoming sequel about "Sherlock Gnomes." (Perhaps for further sequel inspiration, John should turn to fellow platform aficionado David Bowie's "The Laughing Gnome," which is just chock-full of equally risible gnome puns.)
Posted by Tanner at 6:21 PM