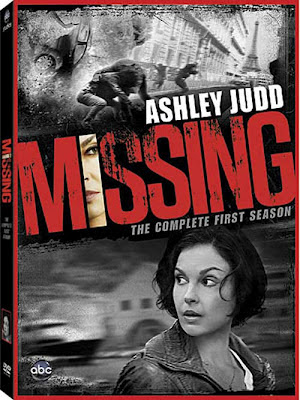 It only premiered last week, but TV Shows On DVD reports that ABC has already announced a June 12 release date for Missing: The Complete First Season on DVD! Missing is ABC's "Taken with a lady" spy series starring Ashley Judd as a former CIA agent fighting her way across Europe to rescue her missing teenage son, all while evading the intelligence agencies of America, Italy and France along the way. The best part is that, unlike most American TV shows, Missing is actually filmed in Europe! And the locations are among the show's highlights, along with the impressive action scenes. (Read my full review of the pilot here.) Sean Bean (GoldenEye), Cliff Curtis (Colombiana) and Adriano Giannini co-star. According to the website, extras include deleted scenes, bloopers, and the featurettes "Production Journal: Istanbul," and "Genesis Piece." (The copy for the latter invites us to "join Ashley Judd and creators Greg Poirier and Gina Matthews as they investigate the genesis and production of this international project.") Strangely, there's no mention of any commentaries, which is odd because Poirier has already recorded such a track for the pilot, as has producer Grant Scharbo for Episode 2, both of which you can listen to now on ABC's website. (Which is a pretty neat idea.) The 3-disc set includes all 10 Season One episodes, and retails for $39.99. It's already available to pre-order for less than that, though, on Amazon.

Cool covers - do you know who the designer is?