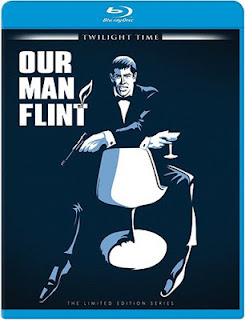 The Our Man Flint Blu-ray from specialty label Twilight Time is now available to pre-order from Screen Archives Entertainment! And pre-ordering might be a good idea; Twilight Time's releases are all limited editions, and they frequently sell out. Our Man Flint is strictly limited to 3000 copies, so ensure yourself a copy by ordering today. This is a very exciting release, because unlike a lot of Twilight Time titles, it boasts a plethora of special features, many of them newly created for the Blu-ray. (And some of those extras involve me, so, you know, I've got to admit, I find that kind of cool.) This disc will include an audio track with Jerry Goldsmith's complete isolated score, an audio commentary with Cinema Retro's Lee Pfeiffer and Eddie Friedfeld, the original theatrical trailer, the featurettes from The Ultimate Flint Collection DVDs "Spy Style" (6:46), "Spy-er-ama" (9:13), "Perfect Bouillabaisse" (1:28), "A Gentleman's Game" (4:15), screen tests with James Coburn and Gila Golan (4:36) and Coburn and Raquel Welch (1:53), three storyboard sequences ("Escape from Galaxy Island," "Control Room Battle" and "Escape from Armageddon"), and the all-new documentaries "Derek Flint: A Spy is Born" (24:54), "Directing Flint: Daniel Mann" (11:14) and "Flint vs Kael" (6:11). Those docs were produced by John Cork, one of the guys responsible for the amazing behind-the-scenes documentaries on the James Bond special editions, so they're bound to be good. (And I'd be saying that even if I hadn't been interviewed for them!) This spy spoof classic starring the inimitable James Coburn (surely the suavest of all the 007 wannabes) will be available exclusively from the online retailer Screen Archives Entertainment for $29.95, and is availble to pre-order now. The disc will ship on January 15. An In Like Flint Blu-ray (which I hope will also boast new extras) follows on February 12. That's a great way to start the new year for Sixties spy fans!
Posted by Tanner at 5:23 PM

Well, I ordered a copy - the extras were too enticing to ignore - but I really hate these "Limited Edition" products. They cost too much for a guy like me whose income is... shall we say... inconsistent and unreliable.

Already pre-purchased! How great is it you're on the extras?!? Between the BOND set and this, 2013 will be full of happy viewing!